SMU head coach Chad Morris spoke this week about how his team had to rebound after facing adversity for the first time in this young season. The Mustangs (3-1) did that in a big way on Saturday night, blowing past Arkansas State 44-21.

“I felt like this ballgame was a pivotal game for our program moving forward,” Morris said. “My message was that if we continue to play with the effort and energy you’re playing with in each of the first three weeks, we’re going to do a lot of great things. I challenged them to respond. Can you respond and play with that energy level coming off an emotional game that didn’t come out our way. It’s all about response.” 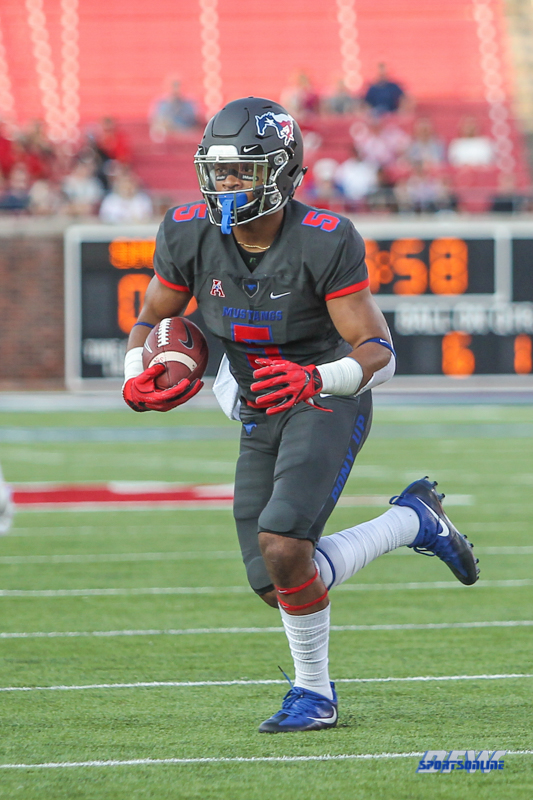 The Mustangs’ offense dominated the game, racking up nearly 600 total yards while controlling the ball with 314 rushing yards. That success on the ground played a big part in SMU’s control of the game. SMU ran 86 plays and was able to play keep-away from Arkansas State’s dynamic offense by holding the ball for more than 36 minutes.

Early on, it appeared like the two teams were heading towards a high-scoring shootout. In the closing seconds of the first quarter, Arkansas State found the end zone to take a 14-10 lead. At that point, the Mustangs clamped down and took over the game. Arkansas State wouldn’t score again until the game was already essentially decided in the fourth quarter as SMU’s offense rolled off 27 consecutive points.


SMU’s offense wore down Arkansas State with its committee of playmaking running backs. Sophomore Xavier Jones led the way, gashing the Red Wolves to the tune of 146 rushing yards. Sophomore Ke’mon Freeman wasn’t far behind, picking up 92 yards and finding pay dirt twice. It’s not like junior Braeden West wasn’t productive either, averaging five yards a carry to pick up 63 yards on the ground while also grabbing three passes.

We had close to two 100-yard rushers, but they were fresh,” Morris said. “Anytime you can rotate fresh backs, especially late in the game, it makes you so explosive. It was great to see Xavier Jones have the breakout game. Braeden West continues to be solid. Ke’mon Freeman is a punishing runner. There’s a great combination there. Running the football was going to be vital for us, especially if they were going to run cover two.”

When SMU went to the air, it found big plays. Quarterback Ben Hicks found sophomore James Proche twice for big play touchdowns of 49 and 55 yards. Proche had a career day in general, leading the way for the receivers with 131 yards.

Defensively, it was impressive how Van Malone’s unit was able to stem the tide of Arkansas State’s early moment. The Red Wolves have a potent offense, but SMU was able to silence Arkansas State over the second and third quarters. When the Red Wolves did finally score again in the fourth quarter, the game was no longer in doubt.

With an offense that was able to control the game as much as SMU’s did tonight, the defense complimented it perfectly. They continued their opportunistic style of playing, forcing two turnovers and holding the Red Wolves to 3-of-12 on third down.

SMU is 3-1 for the first time since 2011 and are at home again next week to improve on it. The Mustangs host UConn at 3 p.m. at Gerald J. Ford Stadium to open conference play.