In a stunning move, the Houston Texans have fired general manager Brian Gaine.

The team announced Friday afternoon it had decided to relieve Gaine of his duties as general manager.

On a sleepy offseason afternoon, news of Gaine’s departure was shocking as it comes less than two years into his tenure.

“After a thorough evaluation of our football operations, we have decided to relieve Brian Gaine of his duties as general manager,” Houston chairman and chief executive officer Cal McNair said in a statement. “While the timing may be unusual, this decision was made in the best interest of our organization in our quest to build a championship team for the City of Houston.” 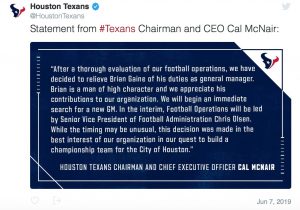 Also in the statement, the Texans said in the interim that Chris Olsen, the team’s senior vice president of football administration, would take over football operations.

It’s still early in the process, but the Texans might already have a front-runner for the position. Houston is expected to put in a request to interview Patriots de facto general manager Nick Caserio, according to NFL Network Insider Ian Rapoport and NFL Network’s Tom Pelissero. It is unknown if New England will grant permission, but the Patriots declined to grant it when Houston asked before hiring Gaine.

Gaine, who’s previously worked with the Texans as director of player personnel from 2014 to 2016, was hired in January of 2018 as the general manager.

In the only season under the Gaine GM umbrella, the Texans posted an 11-5 record that came with an AFC South Division title, but ended with an exodus in the wild-card round of the playoffs.

Roughly a year and a half into a five-year contract with the Texans, Gaine, “was more or less handpicked by head coach Bill O’Brien after O’Brien got his contract extension to come in and take over for Rick Smith as the general manager,” Pelissero reported.

There was no particular incident that brought upon Gaine’s dismissal, Rapoport reported. Instead, the Texans did an evaluation of their football operations and the final findings were that Gaine was, “good, but not good enough,” Rapoport said.

This is the second-post NFL Draft firing of a general manager following the Jets giving Mike Maccagnan his termination. While the timing is bad — borderline awful — it’s not unprecedented considering Maccagnan’s situation and previously with current Browns GM John Dorsey and GiantsGM Dave Gettleman with the Chiefs and Panthers, respectively.

The most pressing front going forward for the Texans — aside from finding Gaine’s permanent successor — would seem to be the lingering situation with the franchise-tagged Jadeveon Clowney’s contract. Other particular problem points during Gaine’s short reign in the front office were the departure of safety Tyrann Mathieu in free agency and a draft seen as lackluster to many, including the inability to draft tackle Andre Dillard. With quarterback Deshaun Watson getting sacked a league-high 62 times in 2018, protecting him was paramount. However, Dillard, who the Texans were reportedly high on, was taken a pick before Houston by the Philadelphia Eagles, who traded up.

No matter what the real reasons were behind Gaine’s departure, the timing and shocking nature certainly woke up the NFL world on what had been, as aforementioned, just another sleep offseason afternoon.

Said Pelissero: “He was fired today in a move that certainly sent shockwaves across the NFL.”