DENTON – The predictions were for an offensive shootout in Saturday’s opener at Apogee Stadium, that 30-plus points would be needed to win. Maybe 40.

The North Texas defense, however, was having none of it. 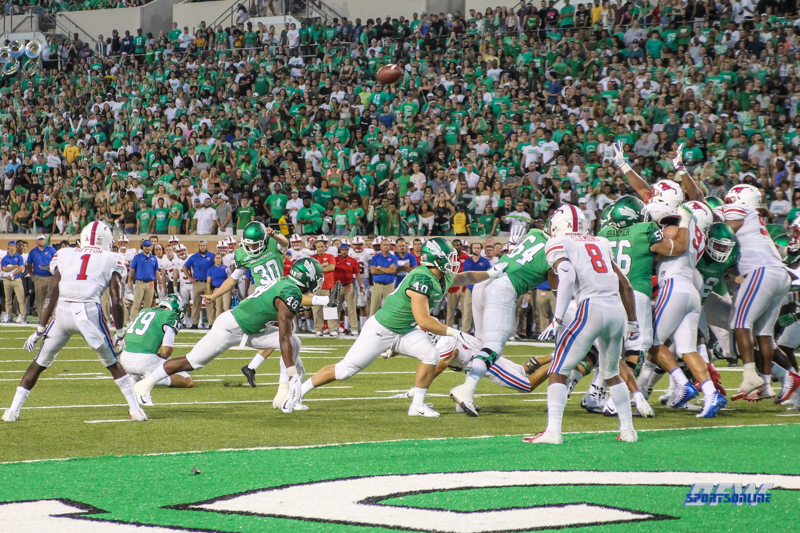 The Mean Green defense stole the show Saturday, obliterating SMU in a 46-23 North Texas victory. The Mean Green allowed the Mustangs two first downs and 46 yards total offense through the first three periods, surrendered 4 yards rushing for the game, got an interception returned for a touchdown from Kemon Hall, and forced six three-and-outs from the Ponies.

“The defense has had a chip on their shoulder,” he added. “They did a tremendous job, everybody making plays. We weren’t missing tackles and we were getting off the field.”


The North Texas offense, meanwhile, put together scoring marches of 49, 59, 93, 75 and 95 yards to pile up a 33-0 lead. Quarterback Mason Fine opened his junior season by completing 40 of 50 for three touchdowns and a career-high 444 yards, the second 400-yard performance of his career and ninth in school history.

“We knew this was a big game,” Littrell said. “We’ve been circling this one and really talking about it.”

The game was played before the biggest home crowd in school history of 29,519, surpassing the previous best of 29,437 set in 2003 against Baylor at Fouts Field.

“I can’t say enough about the great crowd we had tonight,” Littrell said. “They really helped bring the energy and I thought the team fed off that, and it helped us get off to a great start. I thought the energy we came out to start the game with was the difference early on.”

North Texas opened the game on defense and was immediately dominant. It didn’t allow a first down until the second quarter and allowed 24 yards total offense in the first half. And when the Mustangs finally picked up a first down late in the second quarter, North Texas ratcheted up the pressure on Hicks, forcing two incompletions and getting a sack from linebacker Brandon Garner to snuff out the Mustangs’ lone incursion across midfield in the first half.

It got no better for SMU in the third period, by the end of which the Mustangs’ offensive totals had climbed to two first downs and 46 yards total offense. North Texas linebacker E.J. Ejiya led the assault with five tackles, two sacks and a forced fumble, and Garner had six tackles.

By the start of the fourth, North Texas had built a 36-0 lead. The Mean Green scored on their first drive of the game on a 15-yard toss from Fine to Jalen Guyton, who had two touchdown receptions on the night. The defense made it 14-0 when Hall intercepted a pass from SMU QB Ben Hicks and returned it 36 yards for a touchdown, and the Mean Green added a pair of second-quarter field goals from Cole Hedlund for a 20-0 halftime lead.

North Texas put the game away in the third quarter with 75- and 95-yard touchdown marches.

SMU scored three touchdowns in the closing moments, and North Texas tacked on a late score on a 97-yard kickoff return from DeAndre Torrey.