Chad Morris mentioned several times in his Tuesday press conference that he believed his team this year was his best one yet at SMU as well as one of the better squads the Hilltop has seen in years. It’s obviously a long season, but it’s difficult to have a much better start to the season. The 58-14 win against Stephen F. Austin on Saturday was SMU’s largest margin of victory since 2012 and easily the largest of the Morris Era.

“We’re building something,” Chad Morris said. “It’s taking time, and we’re not done. We’re not as good a football team as we’re going to be, but we’re the best we’ve ever been since I’ve been here. I’m extremely proud to say that. As you build a program from the ground up, that’s what you ask coming into year three.” 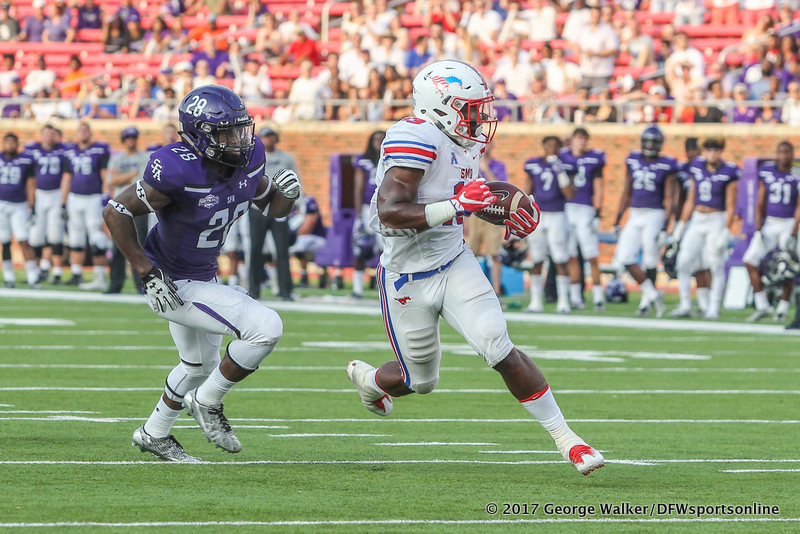 The Mustangs scored on all three of their first offensive drives while adding two defensive scores from junior Jordan Wyatt to blow past the Lumberjacks right out of the gate. It was one of the most dominant first halves SMU has put together. The 31-point lead was the largest the Mustangs have enjoyed since 2011.

Morris’ tempo offense mixed in with the talent and depth he’s added is really starting to show dividends. SMU has jumped out with 38 first half points in two of the last four games dating back to last season. Before the ECU game last season, the 38-point mark had not been reached in the first half in a decade (2006).


Points are often thought of as an offensive stat, but it was the Mustang defense that provided the spark for SMU. They kept the Lumberjacks hemmed up for the entire contest, limiting Stephen F. Austin to fewer than 220 total yards.

Wyatt’s hard work this offseason provided immediate returns. Every day in practice, he embraces the challenge of competing against his roommate Courtland Sutton. That means every day in practice, he’s going up against the best college football has to offer. It’s paying off. He tallied five tackles, including 2.5 for loss, and provided the Mustangs with two of the biggest plays of the game.

In the first quarter, the Mustang cornerback stepped in front of a forced pass at the SMU 15 yard line to end a Stephen F. Austin scoring threat. That alone would have been a big play to keep SFA off the board. Wyatt wasn’t done yet, taking the interception back 85 yards for a touchdown.

Three Lumberjack drives later, he was back at it. SMU defensive coordinator Van Malone dialed up something a little different, blitzing Wyatt off the edge. He went untouched to the quarterback’s blind side, forcing a fumble and recovering it in the end zone.

Wyatt is just the fourth player in the last two seasons (2016 and 2017) to score two defensive touchdowns in the same game. An SMU player was one of the three players to accomplish the feat last year as well, when Horace Richardson scored twice against ECU.

“Jordan Wyatt picked up right where he left off a year ago,” Morris said. “I think he’s one of the best players in all of college football. He has to line up everyday and go against Courtland Sutton. I think you can see it definitely helps him out, and he’s gotten better.”

Many times in the first game of the season, teams can be a little sloppy from general rust or from missed assignments. That wasn’t the case for the Mustangs. SFA managed only two chunk plays of 20+ yards, and SMU’s offense played a clean game in terms of turnovers.

“I thought we did a good job of doing what we had to do in the passing game,” quarterback Ben Hicks said. “The running game was great. That’s the best we’ve ran the ball since I’ve been here.”