Andrew Luck dropped a bombshell during the preseason.

The Indianapolis Colts quarterback is stunningly retiring from the NFL, NFL Network’s Tom Pelissero reported. Luck informed the team of his plans to walk away and confirmed the news in a presser on Saturday night. 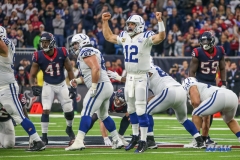 “This is not an easy decision. Honestly, it’s the hardest decision of my life. But it is the right decision for me,” Luck told reporters after Indianapolis’ preseason game Saturday night. “For the last four years or so, I’ve been in this cycle of injury, pain, rehab, injury, pain, rehab, and it’s been unceasing, unrelenting, both in-season and offseason, and I felt stuck in it. The only way I see out is to no longer play football.”

Wild. Unreal. Crazy. Insane. Unbelievable. Nuts. Use whatever exclamatory word you want, it’s a berserk story that dropped as the Colts were in the middle of their preseason game versus the Chicago Bears. As news leaked, TV broadcasts showed the QB on the sideline talking with backup-turned-starter Jacoby Brissett and other teammates.

The 29-year-old former franchise signal-caller has dealt with a plethora of injuries the past several seasons, including a shoulder issue that wiped out all of his 2017 season.

Luck bounced back with a fantastic 2018 campaign, throwing for 4,593 passing yards, tossing 39 touchdowns and leading Indy to the playoffs. If not for Patrick Mahomes’ ridiculous season, Luck could have been a candidate to win the MVP last year.

Another offseason, however, was disrupted by injury. Luck began dealing with a calf injury back in April. The issue continued to nag the QB into training camp and was finally revealed to be an ankle injury.

All the injuries wore on Luck, and he decided to take his ball and go home.

“I’ve been stuck in this process. I haven’t been able to live the life I want to live,” Luck said. “Taken the joy out of this game, and after 2016, when I played in pain and was unable to regularly practice, I made a vow to myself that I would not go down that path again, I find myself in a similar situation and the only way forward for me is to remove myself from football and this cycle that I’ve been in.

“I’ve come to the proverbial fork in the road. I made a vow to myself that if I ever did again, I would choose me in a sense.”

The former No. 1 overall pick, entered the NFL as the epitome of a franchise quarterback owning the size, arm, intelligence, demeanor and grit. Luck immediately boosted the Colts from the cellar of the NFL to the playoffs. With a less-than-ideal offensive line in front of him, Luck helped drag Indy to the playoffs the first three seasons of his career.

After seven seasons, the Colts finally seemed poised to have the ideal team surrounding Luck to make a Super Bowl push. The injuries, however, wiped away those plans.

Luckily for Indy, Brissett is a starting-caliber quarterback and will take over full-time duties.

But there is no way to slice it, Luck leaving the NFL before turning 30 years old in less than a month is the most stunning retirement in history.