FORT WORTH, Texas — Perhaps it’s only fitting that a game featuring 695 rushing yards would be won by Army, which has taken running the ball and marching down the field 50 years into the past to be successful in the present.
Kell Walker ran in a two-point conversion after Darnell Woolfolk’s 1-yard touchdown burst with 18 seconds to play to lead Army to a scintillating 42-35 victory over San Diego State in the Armed Forces Bowl Saturday at Amon G. Carter Stadium. 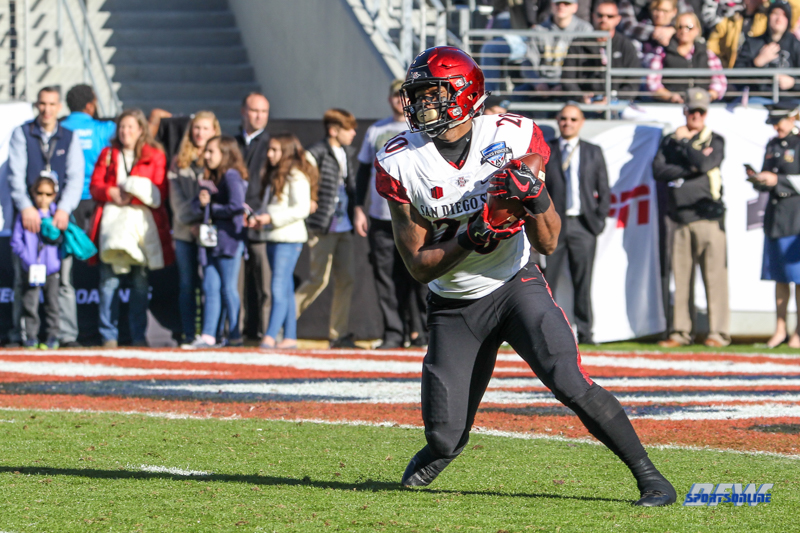 
Raashad Penny’s 4-yard scoring run with 5:47 to play gave San Diego State a 35-28 lead but the Black Knights (10-3) responded with a 72-yard, 15-play drive and a 1-yard TD blast by Woolfolk.
Army eschewed an extra-point kick and chose to pitch the ball to Walker, who ran untouched around right end for the winning conversion.
“On the final drive, we talked about having a two-point conversion ready when we scored because no one on our team wanted to see Penny with the ball in his hands in overtime,” Army coach Jeff Monken said. “Our guys were all tired at the end of the game but we gave the effort and gutted it out with determination. There was never any doubt in our players’ eyes on the final drive, and that’s not something you can fake.
“We did what we had to do to win.”


It’s the first time in history that Army has captured 10 victories in consecutive seasons.
“We didn’t do anything today that we didn’t so all season, but we did what we do very well,” Army quarterback Ahmad Bradshaw said. “We have been able to raise the expectations about Army football over the past two seasons — 10 wins are now the standard.”
Army’s Elijah Riley snagged a pitch during a desperation play by the Aztecs as time expired and returned it 29 yards for the game’s final points.
Penny, the nation’s leading rusher, ran for 221 yards and four touchdowns on just 14 carries to lead San Diego State (10-3).
Bradshaw amassed 180 yards rushing on 32 carries and scored on rushes of 19 and 27 yards for Army. He became the all-time leading rusher among the three service academies (including Navy and Air Force), breaking the mark set in 2015 by Keenan Reynolds of Navy.
Woolfolk had a 7-yard TD run and Andy Davidson rumbled into the end zone from 4 yards out for the Black Knights. Army threw just four passes in the game (none of them in the first half) for a total of six yards and an interception but rushed for 440 yards and owned a 46-to-14 minute advantage in time of possession.
“Both teams played well enough on offense to win this game, but our defense played very poorly,” San Diego State coach Rocky Long said. “We had some chances to put the game away and we didn’t, and it cost us. Army out-formationed us, and we never correctly adjusted to it.”
Penny ran 81 yards for a touchdown on the first possession of the game. He added a 32-yard TD in the second quarter, a 49-yard scoring run — on one of just five offensive snaps in the third quarter for San Diego State — in addition to his late score.
The Aztecs also got a 78-yard kickoff return for a touchdown on the next-to-last play of the second quarter from Juwan Washington.
It was the fifth straight 200-plus-yard rushing game for Penny, which ties an FBS mark. Penny’s production in the game garnered him the school’s single-season rushing record, propelling him past former Aztecs standout Donnel Pumphrey, the NCAA’s all-time leading rusher.
“All those numbers and records don’t mean anything to me because we lost this game,” Penny said. “I was able to hit some big runs because I was fresh on the sidelines and the offensive line did their job for me.”