ARLINGTON — The Astros are on pace for 101 wins, most of which will be remembered as skillful, clean and well-played. Count Saturday’s affair at Globe Life Park with the Rangers as an exception to the rule.

The Astros beat the Rangers, 4-3, and are in line for a possible sweep of the four-game set. But what made this game unusual was the ineffectiveness of their starting pitcher, coupled with the fact that this was still a very low-scoring game.

ARLINGTON, TX - JUNE 09: Houston Astros catcher Max Stassi (12) is congratulated by Houston Astros outfielder Tony Kemp (18) after hitting a home run during the game between the Texas Rangers and the Houston Astros on June 9, 2018 at Globe Life Park in Arlington, TX. (Photo by George Walker/Icon Sportswire) 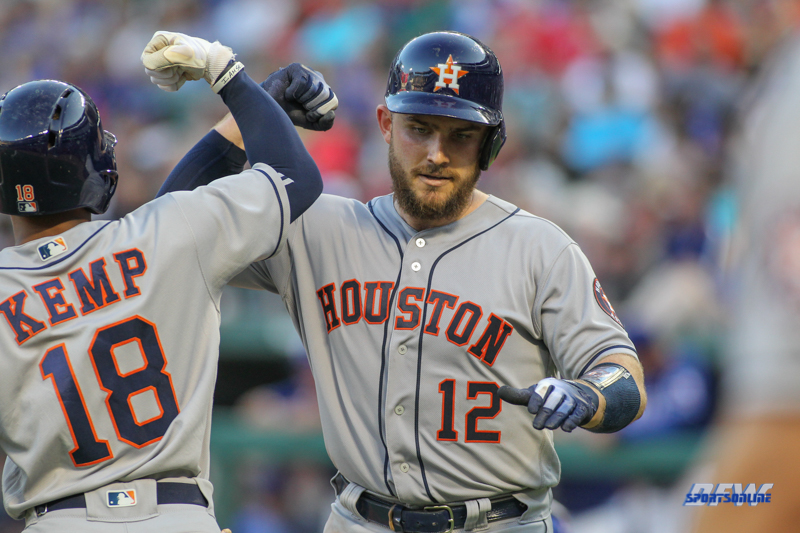 ARLINGTON, TX - JUNE 09: Houston Astros catcher Max Stassi (12) is congratulated by Houston Astros outfielder Tony Kemp (18) after hitting a home run during the game between the Texas Rangers and the Houston Astros on June 9, 2018 at Globe Life Park in Arlington, TX. (Photo by George Walker/Icon Sportswire)

It’s fair to say Charlie Morton had one of the more unusual pitching lines of any starter in the Majors this season. It starts off innocuously enough — one hit, two runs, one earned run. But Morton also reached career-highs in two categories he’d surely rather not — he walked six batters and plunked four.

“I got away with not knowing where the ball was going,” Morton said. “It was a pretty unprofessional outing, I think, bordering on embarrassing.”


But Morton received a lift — not from the Astros’ offense, but from the Rangers, who stranded at least two batters in each of the first six innings and ended the night with 17. Of the 23 batters Morton faced in his 3 2/3 innings, two scored — Rougned Odor, on Delino DeShields’ ground ball in the second, and Robinson Chirinos, who followed Odor to the plate on a Nomar Mazara sacrifice fly.

The only hit Morton allowed was a double to Ronald Guzman, who accounted for three of the 17 stranded baserunners.

“I don’t know if they had an inning where they didn’t have runners on,” manager AJ Hinch said. “It felt like there were runners all over the place for nine straight. We’re happy on this side, because we got out of it.”

For Morton, Saturday’s game represented the second outing in a row during which he’s struggled. He yielded six runs to the Red Sox in his prior outing last Sunday, ending a string of six starts in a row in which he allowed three or fewer runs.

Morton said he’s identified the problem. Now, it’s just a matter of working between starts to fix it.

Morton is just the third pitcher to walk six and hit four batters in a game. If he needs a been-there-done-that pep talk, he won’t have to look far — Steve Sparks, who currently serves as the Astros radio analyst, had a similar game for the Angels on May 22, 1999. The other pitcher to walk six and hit four was Tommy Byrne, who did it while pitching for the Yankees on July 5, 1950.

Following Morton’s exit, it was up to the Astros’ bullpen to absorb the final 5 1/3 innings. Tony Sipp, who struck out three in one inning, earned the win. He was the pitcher of record when George Springer drove in the tiebreaker with a base hit off Jose Leclerc in the seventh.

Lost in the bizarre nature of this game was Mike Minor’s solid start for the Rangers. He opened the game by walking Springer and allowed run-scoring hits by Alex Bregman and Yuli Gurriel, but he settled in to yield just one baserunner for the next three innings. Max Stassi’s homer in the fifth accounted for Minor’s final run allowed.