By Matthew Martinez, The Sports Xchange

ARLINGTON, Texas — Texas Rangers third baseman Adrian Beltre may have made history in Sunday’s rubber match against Baltimore, but the Orioles got out of town with the series win. 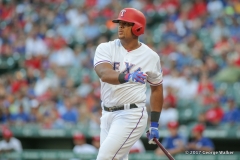 The Orioles tagged Rangers starter Martin Perez for eight earned runs and overcame Beltre’s 3,000th career hit as well as two home runs and five RBIs from Rougned Odor in Sunday’s 10-6 win at Globe Life Park.
Baltimore (50-54) won two of three in the weekend series between the two teams struggling to stay relevant enough to concern themselves with their standings in the wild card race.
Beltre became the 31st player in major league history to record 3,000 hits when he ripped a bouncing double down the third base line in the bottom of the fourth inning against the Orioles. A crowd of 32,437 braved the 92-degree heat to see the milestone.
“(Beltre) has meant so much to this team. He’s been a mentor to people in this organization,” Rangers manager Jeff Banister said. “So yeah, it’s appropriate to celebrate 3,000 hits for Adrian. Moments like this mark time for all of us. You want to remember this. You may never see this again.”
Fans throughout Gobe Life Park had their smart phones out, recording the moment for posterity. After all, Beltre became both the first player in a Texas uniform to reach 3,000 hits, and the first player to reach the milestone playing in Arlington. Beltre pulled the double on a 3-0 pitch to help keep the Rangers in the game.


“I wasn’t trying to let him get a hit by any means,” said Baltimore starter Wade Miley (5-9). “But at the same time, as a fan, if it had to happen, that guy’s an unbelievable player. He’s the kind of player you want your kids to watch. That’s the kind of respect I have for him.”
Two batters later, Odor drove in Beltre and Nomar Mazara, who drew a walk before Beltre’s historic at-bat to cut the Orioles’ lead to 4-2.
Perez (5-9) ran into trouble his second time through the lineup and was lifted in favor of reliever Jeremy Jeffress in the fifth. Manny Machado led off the top of the fourth by lining a double into the left-field corner on a slider down in the strike zone, and Perez lost Johnathan Schoop one batter later to put two Orioles on with no one out.
Designated hitter Trey Mancini, who came into the game 5-for-7 lifetime against Perez, poked his second hit of the game through the right side of the infield to bring in the first run of the game. Welington Castillo and Chris Davis kept the hit parade going, plating Schoop and Mancini, as the Orioles opened up a 4-0 lead after Ruben Tejada’s fielder’s choice.
Odor homered twice, in the bottom of the sixth and eighth innings, but all those strokes did was pull the Rangers (50-54) to within 10-3 and 10-6.
Schoop belted a two-run homer off Perez to make the score 6-2. It was Schoop’s ninth homer in July. He drove in three runs while Castillo drove in four.
The Orioles made it two big innings in a row when Castillo blasted another no-doubt home run to left field in the fifth, this time off Jeffress. Baltimore scored five more in the inning to open up a 9-2 lead and dampen the buzz that filled the stadium after Beltre’s milestone hit.
Beltre also became the first Dominican-born player to reach 3,000 hits. The double was Beltre’s 605th, tying Hall of Famer Paul Molitor for 14th on the baseball’s all-time doubles list.
“It was an honor to be here for it,” Orioles manager Buck Showalter said of Beltre’s 3,000th hit. “I think everybody in the game has a lot of respect for him, not only statistically, but the way he’s found his success over the years.”
At age 38, in his 20th season, Beltre is hitting .309. He came into Sunday’s game batting .348 in his last six games and went 1-for-5 with two strikeouts.
“I’m going on a year-to-year basis,” Beltre said. “My main reason to stay is to help this team win the World Series.”