Fort Worth, Texas – Todd Bodine won the NASCAR Camping World Truck Series Winstar World Casino 400 race at Texas Motor Speedway. Bodine drove his number 30 Copart.com Toyota away from the field at the end of the race to win his 2nd race in 2009.

This is Bodine’s 5th win at Texas, he is the only driver to win 5 races at any one track.  It is his 17th win in the series. Bodine is currently 4th in the points standings, behind leader Matt Crafton, who took the lead for the first time by finishing 2nd in the race.

Texas native Colin Braun finished 3rd. It is his second top-10 finish in 3 races at Texas Motor Speedway.  Rounding out the top-5 were Johnny Benson and Rick Crawford.

Bodine had battled a loose car most of the night before changes during the final pit stop finally worked.  Bodine credits his team for staying with it and earning the victory, “That’s our motto – never give up.”, he said, “The last three weeks have been tough, four weeks have been tough and they only know one thing and that is not give up.” 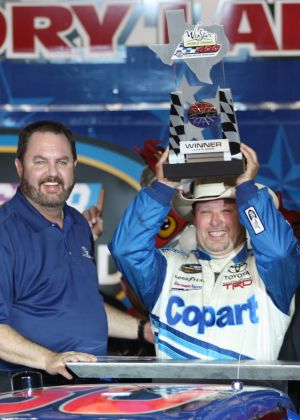