HUNTERSVILLE, N.C. — Calling at least a temporary halt to a career he described as “living a dream,” Carl Edwards confirmed Wednesday his decision to step away from driving race cars to pursue what he described as other adventures.
In a decision that shocked the NASCAR world, Edwards, 37, said he was leaving the Joe Gibbs Racing team and one of the best rides in stock car racing “because I’ve always followed my gut. All the signs point to this being the right thing to do.”
Daniel Suarez will be elevated from the NASCAR Xfinity Series operation at JGR to replace Edwards in the No. 19 Monster Energy NASCAR Cup Series Toyota. 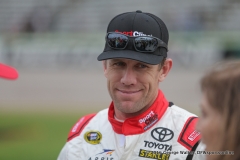 Edwards would not rule out returning to racing in the future, but, during a 37-minute news conference in which he was near tears, he emphasized that many other things — at this point not identified — have his attention.
Edwards said he is satisfied with his driving career, which includes 28 Monster Energy NASCAR Cup victories and an Xfinity Series championship. He barely missed a Monster Energy NASCAR Cup title twice.
“This is an all-encompassing thing,” he said. “It’s full time. It’s not just the physical time. I wake up in the morning thinking about racing, and I go to bed and I have dreams about racing.
“I’ve been doing this for 20 years. I need to take the time right now and devote it to people and things I’m really passionate about.”
Edwards said he has had no discussions about driving for other teams.
“I’m not saying the ‘R’ (retirement) word, but if I get back in a race car I’m calling Coach Gibbs first,” Edwards said. “There is no better race team, no better cars, no better teammates, no better crew.
“This is not a decision I made because I had something else lined up or the desire to line something else up. I am not entertaining and have not contemplated anything like that. Nothing.”
Edwards leaves the sport as the winningest Monster Energy NASCAR Cup driver without a championship who will not be competing. He had a year left on his contract with the Gibbs team.
NASCAR chairman & CEO Brian France said Edwards “has made an indelible mark on NASCAR. His hard-charging driving style has led to memorable moments that will live forever in the history of our sport. Carl’s passion and personality will greatly be missed, as will the signature backflips that NASCAR fans have come to expect following his victories. We wish Carl nothing but the best as he enters this next phase in life.”
An accomplished pilot and owner of a large farm in his home state of Missouri, Edwards listed those endeavors among his interests.
“I’m interested in a lot of aviation stuff, and the agriculture thing has been great,” Edwards said. “But I love the sport. As much as I can, I’d like to be a part of it and be close to it. But there’s nothing solid. I have enjoyed the broadcasting stuff. That could be something that’s neat.
“But I want to be able to spend time on things outside the sport that are important to me. I think it’s the right thing to do.”
Edwards has worked several race telecasts as an analyst or pit-road reporter.
Gibbs said Edwards’ decision was a shocker.
“When he sat down in front of me and shared what he was thinking, I was totally surprised,” Gibbs said. “I said, ‘This is a huge decision. Let’s spend some time thinking about this.’ We took four days and got hooked up again on the phone, and I could tell that he was really committed to stepping away from racing.”
Gibbs said he hopes Edwards will retain a relationship with his team and possibly assist in the Suarez transition.
There has been speculation that Edwards might have a future in politics.
“I do have really strong feelings about our country and what America is about and the principles that keep us free and safe from the biggest risks in history,” Edwards said. “I don’t know. I’m not prepared right now to participate, but I’m very open to helping that cause and liberty and freedom and what America is about.