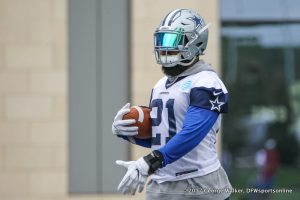 Dallas Cowboys star running back Ezekiel Elliott was suspended six games by the NFL on Friday for violating the league’s personal conduct policy after multiple domestic violence incidents.
Elliott has three days to appeal the suspension and is expected to do so, ESPN reports. The six-game ban is the penalty for first-time offenders of the league’s new domestic violent policy.
The suspension is scheduled to begin Sept. 2 and Elliott is eligible to return to the Cowboys’ roster on Oct. 23, one day after the team’s Week 7 road game against the San Francisco 49ers.
As a result of the suspension, the guarantees in the four-year, $24.956 million deal Elliott signed with Dallas in 2016 will be voided, per ESPN. Elliott will forfeit $559,192 in 2017 salary according to salaray cap website Spotrac.
In addition, Elliott will give up $240,000 per missed game in signing-bonus money if the suspension is upheld.
Elliott, 22, is accused by his former girlfriend of five domestic assault incidents in July 2016 in Columbus, Ohio and has been under NFL investigation, although the city attorney’s office already announced he will not face criminal charges.


Cowboys owner Jerry Jones is reportedly “furious” with the league’s decision to suspend Elliott, according to ESPN.
“Over the course of the last year, the league conducted an extensive investigation,” a league statement read Friday. “League investigators interviewed more than a dozen witnesses, including Ms. Tiffany Thompson, who had alleged multiple instances of physical violence in July 2016, and Mr. Elliott. The league also consulted with medical experts. League investigators examined all available evidence, including photographic and digital evidence, thousands of text messages and other records of electronic communications.
“… After reviewing the record, and having considered the views of the independent advisors, the (NFL) commissioner (Roger Goodell) determined that the credible evidence established that Elliott engaged in conduct that violated NFL policy.”
The NFL Players’ Association also issued a statement saying it is reviewing the league’s decision and has been “in touch with Ezekiel and his representatives to consider all options.”
Jones previously said that the focus of the league’s investigation was centered around Elliott’s behavior and not the domestic violence allegations.
“I have reviewed everything, and there is absolutely nothing — not one thing — that had anything to do with domestic violence,” Jones said during the team’s training camp.
The second-year back is coming off a sensational rookie season in which he rushed for a Cowboys-rookie-record 1,631 yards and 15 touchdowns en route to his first career Pro Bowl selection.