Michael Barrios nearly gave FCD a 1-0 lead in the 18th minute, when center back Matt Hedges worked his way up the pitch and found Reggie Cannon down the right side with a through ball. Cannon cut back and got the ball to Barrios, who had time to pick up his head and shoot towards the far post. Unfortunately for FC Dallas, Barrios caught the ball with the outside of his foot and the shot sailed wide of the goal.

July 14, 2018: FC Dallas defender Matt Hedges (24) prior to the MLS game between FC Dallas and Chicago Fire on July 14, 2018, at Toyota Stadium in Frisco, TX. (Photo by George Walker/DFWsportsonline) 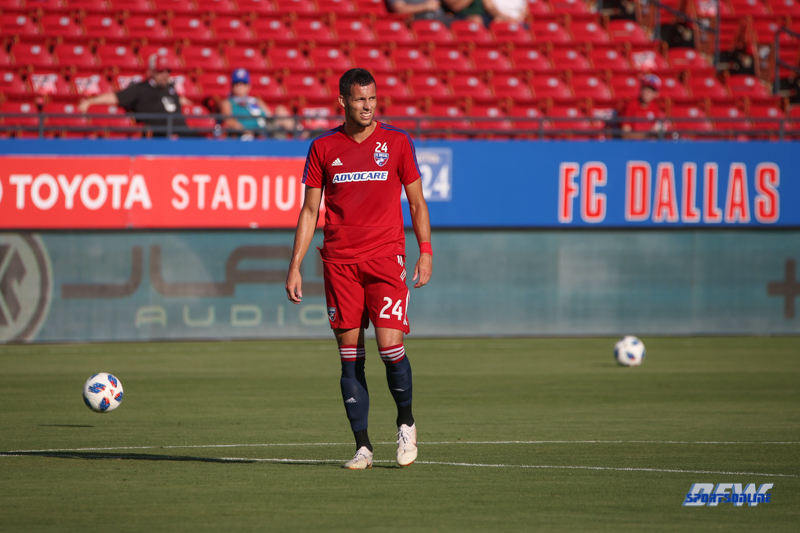 July 14, 2018: FC Dallas defender Matt Hedges (24) prior to the MLS game between FC Dallas and Chicago Fire on July 14, 2018, at Toyota Stadium in Frisco, TX. (Photo by George Walker/DFWsportsonline)

FC Dallas Homegrown defender Reggie Cannon set up the first goal of the match in the 27th minute. Cannon received the ball on the right side, ran at Chicago defender Brandon Vincent, and cut back hard at the edge of the box. The right back then curled a low cross into the area for midfielder Carlos Gruezo, who redirected the shot with his first touch, just inside the far post behind Fire goalkeeper Richard Sanchez.


Barrios had another near miss to begin the second half. Santiago Mosquera worked his way down the left flank in the 49th minute and sent a cross to the penalty spot. A Fire defender deflected the pass out to the right flank, where Barrios took control of the ball, ran to the end line and fired a shot, high towards the far post. A former FC Dallas Academy goalkeeper, Chicago’s Sanchez did well to make the save, high to his right side.

Barrios had a third chance in the 57th minute. The play was also set up by Mosquera, who worked his way to the end line and fired a low pass across the six-yard box. The ball found its way to Barrios at the back post. The Colombian midfielder fired a shot on goal but the attempt was blocked off the line by a Chicago defender, who had the clearance attempt smack off the post before finding its way out of the area.

FC Dallas gained a man advantage when Chicago defender Drew Conner was shown his second yellow card of the match for a tackle on FCD’s Ryan Hollingshead in the 70th minute.

Four minutes later, Kellyn Acosta accepted a pass at the top of the box from fellow Homegrown midfielder Victor Ulloa and ripped a low shot to the far post that skipped over the hands of Sanchez to make it, 2-0.

Maxi Urruti drew a penalty kick for FC Dallas in the 81st minute after getting to the end line and absorbing a slide tackle from Fire defender Jonathan Campbell. Reto Ziegler opted to take the kick for FCD, beating Sanchez high to his left side to make it 3-0.

The Fire got a late goal to make it a 3-1 final. A ball played into the area was cleared to the top of the box but Fire substitute Brandt Bronico stepped in front at the last second and teed up a left-footed shot that caught the inside of the far post and settled into the back of the net.