FRISCO – FC Dallas (1-0-1) picked up its first win and shutout of the 2018 season in a 3-0 win against Seattle Sounders FC today at Toyota Stadium.

FC Dallas controlled the match throughout the opening 15 minutes, creating four shots while holding Seattle without an attempt on goal. Carlos Gruezo’s long drive, 30-yards from goal, was FCD’s most clear opportunity to go ahead early, but the well-struck ball was hit directly at Seattle goalkeeper Stefan Frei.

MAR 18, 2018: FC Dallas midfielder Santiago Mosquera (11) takes the field prior to the MLS game between FC Dallas and Seattle Sounders on March 18, 2018, at Toyota Stadium in Frisco, TX. (Photo by George Walker/DFWsportsonline) 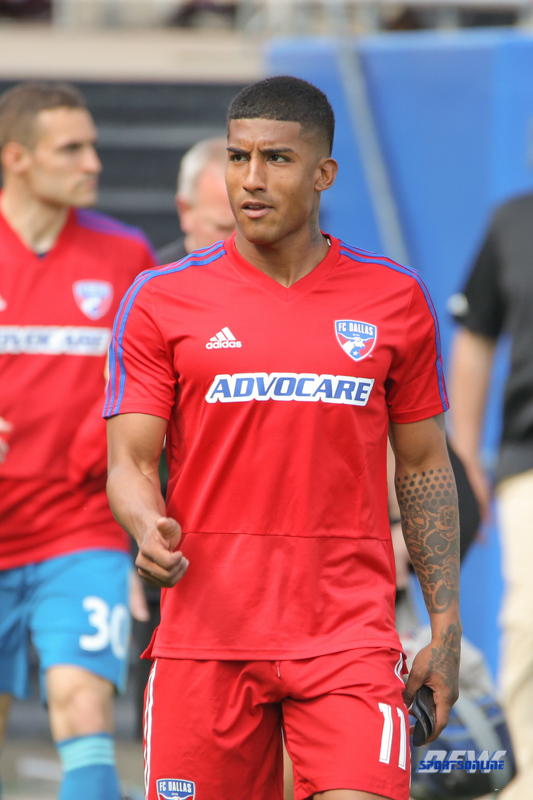 MAR 18, 2018: FC Dallas midfielder Santiago Mosquera (11) takes the field prior to the MLS game between FC Dallas and Seattle Sounders on March 18, 2018, at Toyota Stadium in Frisco, TX. (Photo by George Walker/DFWsportsonline)

Roland Lamah found the back of the net for FC Dallas in the 20th minute. Mauro Diaz started the attack with a perfectly weighted pass up the right flank to Michael Barrios. The Colombian got inside position on his defender and worked his way to the end line before passing the ball across the goal line, beyond the reach of Frei, to Lamah, who tapped the ball over the end line.


Reto Ziegler stepped in front of what looked like a sure goal for Seattle attacker Magnus Wolff Eikrem in the 26th minute. The stop led to a counter-attack for FC Dallas but Maxi Urruti’s back-pass was just out of the reach of Barrios at the other end.

FC Dallas increased its lead to two goals in the 58th minute when Lamah found Urruti with a through ball. The striker collected the pass near the top of the box with the outside of his right foot, turning his run into the middle of the field before firing a hard shot low towards the back post. Urruti’s shot skipped up off the grass and skipped by Frei’s left arm to give FC Dallas a 2-0 lead.

Anton Nedyalkov combined with Lamah on the left flank, dribbled towards the middle of the field, and found the left winger with a second pass to put Lamah in alone on goal. Lamah finished his second of the match by chipping a shot over a sprawling Frei to give FC Dallas a 3-0 advantage.