Frisco, Texas (January 8, 2020) – FC Dallas goalkeeper Jesse Gonzalez has agreed to terms on a new, four-year contract, the club announced today. Per team policy, terms of the deal will not be disclosed. 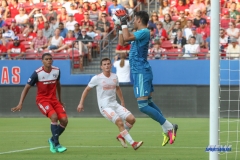 “We’re thrilled to have Jesse with FC Dallas for the next four years,” said FC Dallas President Dan Hunt. “We watched him grow with Luchi in the Academy and he’s earned this opportunity. He continues to believe in what we’re doing, and he has potential to make the [U.S. Men’s] National Team pool for the upcoming World Cups.”

For more information, including soundbites and moments in Jesse Gonzalez’s career, visit FCDallas.com/JesseGonzalez.

“It means a lot to be able to stay with FC Dallas,” said Gonzalez. “I get to keep growing as a player with the help of the coaching staff, Drew Keeshan especially, because he’s helped me since I got here.”

At the age of 20 years and 89 days, he became the youngest goalkeeper in franchise history to start a game on Aug. 22, 2015 against Vancouver Whitecaps FC. Later that year, Gonzalez stopped two of five penalty kicks to lead FC Dallas to the 2015 Western Conference Final. He was part of the team that won both the 2016 Lamar Hunt U.S. Open Cup and MLS Supporters’ Shield.

Gonzalez joined the FC Dallas Academy in 2010 and made his first appearance for the U-16 Academy team on Sept. 26, 2010. The FC Dallas Academy had an 18-8-6 record in matches in which Gonzalez appeared. Between stints with FC Dallas’ U-16 and U-18 Development Academy teams, the goalkeeper logged 2,145 minutes, collected five shutouts and allowed just 1.16 goals per 90 minutes played.

In 2017, Gonzalez was granted a one-time change of association to represent the United States Men’s National Team after participating in youth camps for Mexico and has since earned four call-ups to the USMNT.