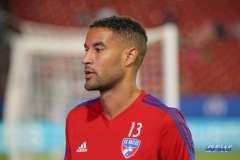 “Tesho was a terrific first-round pick that we were able to watch develop as a professional before our own eyes,” said FC Dallas President Dan Hunt. “He scored fantastic goals but, even more importantly, portrayed the outstanding qualities as a person that we strive for at FC Dallas.”

Akindele, 26, scored 24 goals and eight assists in 133 regular season appearances for FC Dallas and scored in three consecutive playoff runs for the club – the only MLS player to accomplish such a feat. He was drafted sixth overall by FC Dallas in the 2014 MLS SuperDraft after an impressive NCAA Division II career.

He began his career at Colorado School of Mines where he became the school’s all-time leading goal scorer with 76 goals in four seasons. In 2010, Akindele was the first player in his school’s conference to score three consecutive hat tricks. He became the first MLS player to graduate from Southern New Hampshire University since their partnership with Major League Soccer on Nov. 17, 2017.