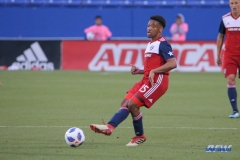 Hayes, 24, was selected 18th overall by FC Dallas in the 2017 MLS SuperDraft and appeared in 38 MLS matches for FC Dallas throughout three seasons. He scored one MLS goal and recorded three MLS assists for the club in 1,936 minutes played. Hayes made his MLS debut on March 11, 2017 and scored his first MLS goal in the 1-0 shutout win against New England Revolution on April 14, 2018 at Gillette Stadium.

Hayes played soccer all four years at Wake Forest University, where he made 81 appearances for the Demon Deacons. In four seasons, Hayes found the back of the net 15 times and assisted on 15 others. He was named a NSCAA First Team All-American in 2016. Born at Andrews Air Force Base in Maryland, Hayes was also an All-American at Dematha Catholic HS. He earned a USSDA Eastern Conference Starting XI nod during his time with the Baltimore Bays in 2011-12.