FRISCO, Texas – FC Dallas has transferred defender Anton Nedyalkov to Bulgarian first division side, Ludogorets, the club announced today. Per team policy, terms of the deal will not be disclosed. 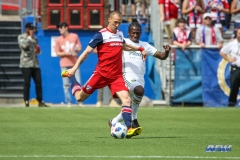 “Anton added a lot to our back line during his short time here,” said FC Dallas Technical Director Fernando Clavijo. “His range also helped our attack on the left side but he had some family issues that required his attention back in Bulgaria. We are sad to see him go but wish him the best of luck in the future.”

Nedyalkov, 25, joined FC Dallas on December 21, 2017. He made his MLS debut in a 3-0 win vs. Seattle Sounders on March 18, assisting on FCD’s third goal, scored by Roland Lamah in the 63rd minute. Nedyalkov played the full 90 minutes for FC Dallas in seven consecutive matches before suffering a broken collarbone in training ahead of FC Dallas’ match vs. Toronto FC on May 25.

FC Dallas compiled a 4-1-4 record in matches that Nedyalkov started. The team allowed just 1.11 goals per match in those games, including two shutouts.