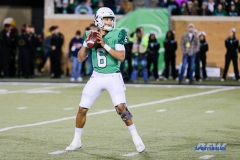 Guyton had a breakout year for the Mean Green, his first in Denton. He leads the team and ranks second in the conference in touchdown receptions with nine, good for 20th best in the nation. He hauled in 48 passes for a team-high 764 yards, averaging 15.9 yards per catch. He has 17 catches of 20 or more yards, which also leads the team. Guyton had one of the best single-game performances in the conference when he caught 14 balls for 211 yards and a score in the win at Southern Miss on Sept. 30.

Tickets to the R+L Carriers New Orleans Bowl are on sale now through the North Texas Ticket Office, and ticket information is available at www.meangreenpostseason.com.