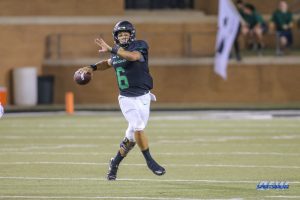 IRVING, Texas – After throwing for 354 yards and leading North Texas on a dramatic 98-yard game-winning touchdown drive in the final minute of the Mean Green’s 29-26 victory over UTSA, sophomore QB Mason Fine has been named Conference USA Offensive Player of the Week. The Defensive Player of the Week goes to FIU junior DL Fermin Silva, who had eight tackles, three tackles for loss and two sacks in the Panthers win over Tulane. Special Teams honors were given to Marshall senior K/P Kaare Vedvik, whose 92-yard punt was the longest in the FBS in 45 years and the seventh-longest ever. C-USA Football Players of the Week are voted on by a panel of the league’s media.

Fine led an impressive game-winning drive for North Texas, while also completing 20-of-34 passes for 354 yards and three touchdowns, along with a rushing TD. With UTSA leading 26-22 with 1:07 remaining, Fine orchestrated a 98- yard touchdown drive in less than a minute, with no timeouts, to lead North Texas to a 29-26 win. The Mean Green were pinned deep inside their own five yard line, and Fine completed 5-of-6 passes on the drive, including a 49-yard strike to Michael Lawrence to put the ball on the UTSA 31. He connected with Rico Bussey, Jr. for a 22-yard touchdown to go ahead, 29-26 with just 10 seconds to play. The Mean Green are now 3-0 in conference play for the first time since 2004, heading into a matchup at Florida Atlantic, which is also unbeaten in league play.


Silva was a dominant defensive force in FIU’s 23-10 win over Tulane on Saturday, registering a team-high eight tackles, recording two sacks, three tackles for a loss (-13 yards) and four quarterback hurries. His second of the two sacks came on fourth-and-eight on the FIU 17-yard line with 2:24 left in the game, forcing the Green Wave to turn the ball over on downs. Silva’s two sacks also equaled a single-game career-high.

Vedvik made national headlines Saturday, launching the longest FBS punt in 45 years with a 92-yarder in the 35-3 win over Old Dominion. It goes down as the seventh-longest punt in FBS history and was the longest since Hall of Fame punter Ray Guy of Southern Miss had a 93-yarder in 1972. On the afternoon, he averaged 48.5 yards per punt, with two that were downed inside the 20-yard line. Four of his punts were not returned. He also averaged 63.0 yards on his six kickoffs with two touchbacks and made all five of his extra-point attempts. For the season, his 44.8 yard punting average is tops in C-USA and 16th nationally.