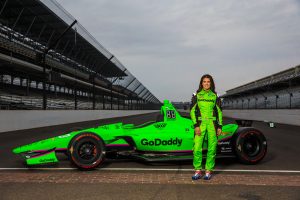 The trailblazing driver, who is known around-the-world on a first-name basis, posed alongside her final ride in this historic photo, captured on the iconic Yard of Bricks at Indianapolis Motor Speedway.

As for the design of her No. 13 GoDaddy Chevrolet, the open-wheeled beauty is branded with the well-known GoDaddy green. New for her historic Indianapolis 500 return, and with an eye to Danica’s future as an entrepreneur, the GoDaddy Indy car also features logos representing Danica’s budding ‘side hustles.’ Distinctive logos for her health and fitness book, apparel line, and vineyard are all branded on the No. 13 GoDaddy Chevy she’ll drive on May 27 in the Indy 500, the second of her final two races dubbed the “Danica Double.”

What Danica is wearing in the photo and in the race also reflects her aspirations as an entrepreneur with a passion for fashion, albeit a very specific style in the fire-resistant category, as she helped design her own Indy car firesuit.


“I will always love the Indianapolis 500, and I’m definitely soaking in all it takes to prepare,” Danica said.  “I’m looking forward to getting back behind the wheel of an Indy car. The Ed Carpenter Racing team has been great. I have to say, this is all better than I imagined when I first started visualizing my last race. I’m back in my GoDaddygreen, tapping my creative side to help promote my own businesses, and finishing out my racing career at Indianapolis Motor Speedway, the track where so many special things first happened to me as a driver. It’s the ideal scenario to close out my racing career and a fitting way to transition into what’s next for me as an entrepreneur. I’m ready, let’s do this!”

Next month, Danica will get down to business behind the wheel during the Verizon IndyCar Series test sessions, set for May 1 and 2, at Indianapolis Motor Speedway. Those test dates, pushed back due to inclement weather this week, will mark the first time Danica has driven an Indy car since 2011.

Danica shattered gender barriers throughout her storied career as the only woman to ever win an IndyCar race, and one of just 14 drivers to lead laps at both the Indy 500 and the Daytona 500. In her life-after-racing, Danica plans to pursue her entrepreneurial passions with the support of her long-time sponsor GoDaddy, the online experts who specialize in helping people take their passions online.

Ed Carpenter, who coincidently has been a GoDaddy customer since 2011, the year Danica last drove an Indy car, sees Danica as a tenacious competitor who has as good a chance to win this race as any driver on the track. “There’s been a lot of buzz about the manufacturer modifications for this season,” Carpenter said. “This new set-up gives the car a downforce more like what Danica drove seven years ago, so it’s less of an adjustment for her than it might be for other drivers. And bottom line, she’s here to take her best shot at winning. She’s a fierce competitor, especially on this track. Our team loves that!”

When the number 13 was announced for her GoDaddy Chevrolet earlier this month, a fan pointed out online that it has been 13 years since Danica first made history in the Indianapolis 500 as the first woman to lead laps. “I’m going to have the year 2005 written on one shoe for the race, and 2018 on the other,” Danica smiled. “I guess I might be getting a little nostalgic. I’ve been saying, if I win Indy, I’ll put the number 13 on my hand every day for the rest of my life.”

GoDaddy is already thinking of the possibilities. “We’ve always said, our sponsorship wasn’t contingent on the number of wins,” said GoDaddy CMO Barb Rechterman. “We love her passion, and the way she goes after what she wants even in the face of naysayers. She’s got moxie, like pretty much every entrepreneur and successful small business owner on the planet. Of course, we’d love to see her win … and I just checked, the domain name ‘Danica13Indy500’ is available.”