FRISCO, Texas — Maybe it was the holiday season but when SMU was in a giving mood Wednesday in the first half of the inaugural DXL Frisco Bowl, Louisiana Tech was more than happy to take the presents that were offered in bunches.
J’Mar Smith passed for three touchdowns and ran for a fourth, all before halftime, as Louisiana Tech took advantage of five first-half turnovers and rolled to a 51-10 victory over the Mustangs at Toyota Stadium in this booming north Dallas suburb. 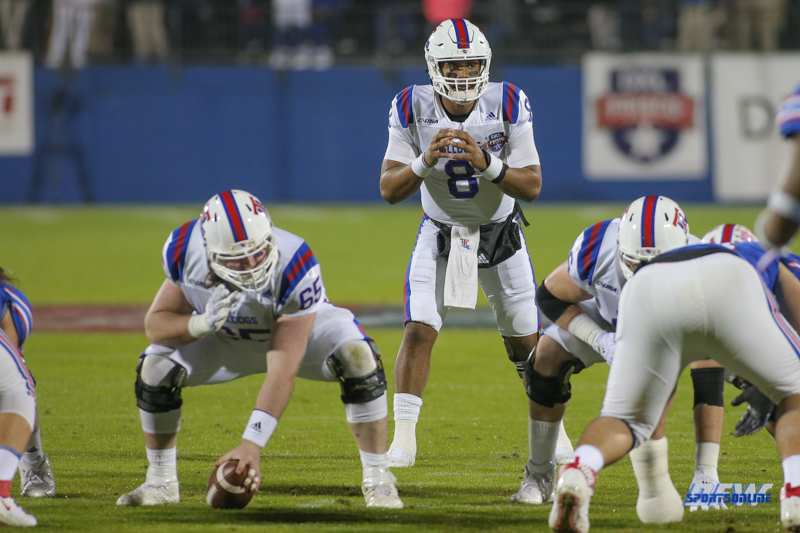 
It was Louisiana Tech’s fourth straight bowl win; the Bulldogs have set scoring records in their past three postseason games.
The Bulldogs (7-6) didn’t have to do much on the offensive side of the ball as their defense intercepted SMU quarterback Ben Hicks three times — two of which were returned for touchdowns, sacked him twice and forced a pair of Mustangs’ fumbles that helped stake Louisiana Tech to a 42-10 halftime lead.
“The first half was the most complete we’ve played all season,” Louisiana Tech coach Skip Holtz said. “Our offense and defense complemented each other very well. Our whole plan was to keep the ball in front of us and live to play another play. I challenged our defense to stop SMU and they did everything we needed to do to win the game.”


SMU (7-6) had committed a total of 13 turnovers all season and Hicks had thrown 32 touchdowns and only nine interceptions in the Mustangs’ first 12 games. All that went out the window in a forgettable first 30 minutes of the game, which were the first in the tenure of newly hired coach Sonny Dykes at SMU.
The Mustangs had averaged 493.8 yards of total offense per game this season but gained 294 on Wednesday. Hicks threw for only 127 yards.
“Once things started spiraling out of control, we just could never break through, could never get any momentum,” Hicks said. “Louisiana Tech was bringing a lot of pressure — you aren’t going to win many games when you have five turnovers in the first half.”
Smith (15 of 23 for 216 yards passing) scored on a 1-yard fourth-down quarterback sneak on the Bulldogs’ first possession after an interception and 31-yard return to the SMU 30 by Secdrick Cooper, the second turnover by the Mustangs in the initial four minutes.
Amik Robertson picked off Hicks’ pass on SMU’s following possession and returned it 45 yards for touchdown, granting the Bulldogs a 14-0 lead with 6:50 to play in the first quarter.
“We were given a good defensive game plan and we focused on making plays,” Robertson said. “We saw some things in film study of the SMU offense that we thought we could exploit and we got rolling and never stopped. And that began with the fumble we caused on the first play of the game.”
The Mustangs’ Josh Williams booted a 25-yard field goal to cut the lead to 14-3 with 3:04 left in the opening quarter when SMU’s drive stalled in the red zone.
Jaqwis Dancy’s 65-yard return on the ensuing kickoff precipitated Smith’s 6-yard touchdown pass to Teddy Veal four plays later that pushed the Bulldogs’ cushion to 21-3 with 45 seconds to play in the first quarter.
Darryl Lewis then intercepted Hicks early in the second quarter and returned it 23 yards for touchdown and 28-3 Louisiana Tech lead.
Smith and Veal hooked up again for a 27-yard touchdown pass that expanded the Bulldogs’ lead to 35-3 with 5:12 to play in the second quarter before a fifth first-half turnover for SMU — this one a fumble by running back Braeden West — led to Smith’s 11-yard touchdown pass to Kay McKnight and a 42-3 lead for the Bulldogs.
Hicks and the Mustangs finally produced something positive, marching 78 yards in nine plays to a 9-yard touchdown pass to Trey Quinn to make it 42-10 at halftime.
Jonathan Barnes kicked a 28-yard field goal on the opening drive of the third quarter, added a second kick from 43 yards with 3:53 remaining in the third and tacked on another from 41 yards away midway through the fourth quarter to run the Bulldogs’ lead to 51-10.
If the Mustangs were going to forge any sort of comeback, they needed to make up ground in the third quarter. Instead, SMU bumbled its way to only 21 yards on nine snaps in the quarter, making the rest of the game little more than mop-up time for both teams.
“Clearly things didn’t go as well for us as we wanted them to,” Dykes said. “Louisiana Tech was better prepared than we were and they played harder than us. We tried a little but too hard at times, and that happens when you get off to the kind of start we did.”