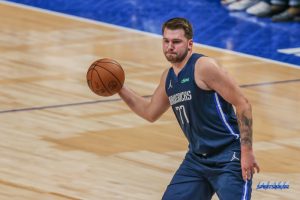 The 23-year-old has now been named All-NBA First Team in three of his first four seasons, joining Larry Bird, George Gervin and Duncan and as the only players to earn three-or-more All-NBA honors within their first four seasons since the ABA/NBA merger (1976-77).

Among NBA leaders, Dončić ranked third in scoring, fifth in assists and 19th in rebounds. He finished in the top 25 in all three categories for the third year in a row.

The three-time All-Star led Dallas in points, rebounds and assists in the same game 34 times during the regular season (including ties), the second-most times a player has led his team in all three categories in 2021-22, behind the reigning two-time league MVP Nikola Jokić (39). Dončić also finished with 49 20-point, five-rebound, five-assist games this year, his third consecutive season with 49-or-more 20-5-5 efforts (50 in 2019-20, 49 in 2020-21).