DALLAS — If the rebuilding Atlanta Hawks are going to do anything this season, it’ll most likely be Dennis Schroder leading the way.
So when better to get started than the opener? 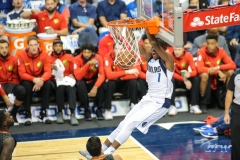 Schroder scored 28 points to lead the Hawks past the Dallas Mavericks 117-111 on Wednesday night at American Airlines Center.
“I just tried to be aggressive,” he said. “Coach told me before the game to try to be aggressive and if they stop you then just find the open teammate. I was aggressive and I tried to look for my shot and I made a couple of them.”
Schroder made 13 of 26 shots from the field and had seven assists. Marco Belinelli and rookie John Collins combined to add 34 points off the bench as the Hawks extended their winning streak to eight against Dallas.
With the score tied at 111, Dewayne Dedmon gave Atlanta the lead for good with a rebound and putback with 58 seconds left. Taurean Prince (10 points, 10 rebounds) put the game away by sinking two free throws with 14 seconds remaining.
Belinelli knocked down four 3-pointers on his way to 20 points. Collins was 6 of 10 and pulled down five boards.
“Just finding a way to win a game in the fourth quarter; it’s just a good way for us to get this road trip started and hopefully we can improve defensively and keep playing at that pace offensively,” Hawks coach Mike Budenholzer said.


The loss didn’t take away from a dazzling double-double debut by Mavericks rookie Dennis Smith Jr. The 19-year-old point guard looked like a veteran while running the offense, producing 16 points and a game-high 10 assists in his first NBA game.
Mavs coach Rick Carlisle was impressed with his new playmaker, though he expects Smith to go through his share of growing pains.
“A lot of really good things, there are going to be mistakes,” Carlisle said. “Everyone made mistakes, he made a few. He’ll learn quickly, especially now that the real games are starting.”
The Mavs opened the game with an alley-oop dunk by Smith. He went to the locker room with a slight limp in the second quarter shortly after being fouled on a dunk attempt, only to return to the bench quickly and start the third quarter.
“I gave 100 percent effort and we didn’t win, so we are looking forward to the game on Friday and getting our first win this season,” Smith said.
Mavs reserve Nerlens Noel had 16 points and 11 rebounds backing up center Dirk Nowitzki, who was only 4 of 14 from the field and scored 10. Dallas’ Harrison Barnes (14 points) also struggled from the floor, missing 10 of 13 shots.
Dallas shot 44.2 percent from the field and the Hawks made 51.1 percent.
Schroder also enjoyed competing against fellow German Nowitzki, who began his 20th season in Dallas.
“He is about to retire in a few years and to compete against him is always an amazing feeling,” Schroder said.
Wesley Matthews (15 points) gave the Mavs their first lead of the second half (69-68) after consecutive 3-pointers, both coming off passes from Smith. The teams were tied at 82 to start the fourth.
The Hawks went into the locker room in control after finishing the second quarter with a 14-2 run to lead 58-47. Schroder had 16 points at the break on 7-of-16 shooting, with Belinelli scoring 12 points.
The Mavericks return home Friday to face the Sacramento Kings. Atlanta’s three-game road trip to open the season pulls into Charlotte on Friday.