DALLAS – The Dallas Mavericks announced their 2017-18 schedule today, which will tip-off at American Airlines Center vs. Atlanta on Oct. 18 at 7:30 p.m. CT.

The 2017-18 campaign will mark the Mavericks’ 38th season and their 17th playing at American Airlines Center. Dallas will play its first two games of the season at home before traveling to division-rival Houston on Oct. 21 for its first road test.

The Mavericks’ national TV schedule includes five games on ESPN, one on TNT and five on NBA TV.

TNT’s lone Dallas game comes when the Mavericks visit the Golden State Warriors for the first time on Dec. 14.

The remaining portion of the Mavericks’ local television schedule for games on FOX Sports Southwest will be released at a later date. All games can be heard on ESPN 103.3 FM and on Univision Deportes KFLC 1270 AM.

Dallas will again play a season-high 16 games during the month of December after competing in a season-high 17 games in December last year. Ten of those games will come on the road, including matchups at Boston (Dec. 6), Golden State (Dec. 14), San Antonio (Dec. 16), Miami (Dec. 22), New Orleans (Dec. 29) and Oklahoma City (Dec. 31).

The reigning world champion Golden State Warriors will make two stops at American Airlines Center. The first trip being just the third home contest of the season (Oct. 23) and the final being the Mavericks first game of the New Year (Jan. 3). The Eastern Conference champion Cleveland Cavaliers will make their only trip to Dallas on Nov. 11.

Mavs tickets are on sale now and can be purchased through mavs.com or by calling 214-747-MAVS. 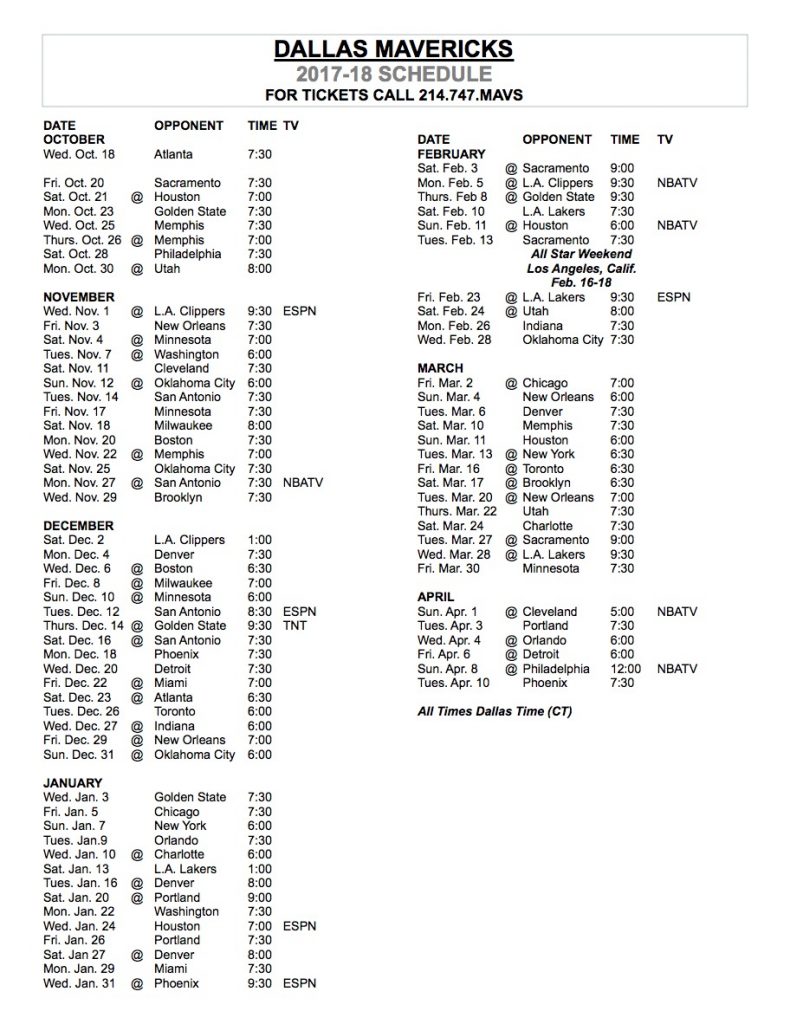