DENTON – The North Texas defense bounced back from its worst performance of the season a week ago to put together four consecutive stops – including three on fourth-and-one – in the fourth quarter, lifting the Mean Green to a 45-38 victory over Old Dominion Saturday at Apogee Stadium.

After ODU rallied from 14-, 18- and 15-point first-half deficits to take a 38-35 lead in the third quarter, the Mean Green defense took over. 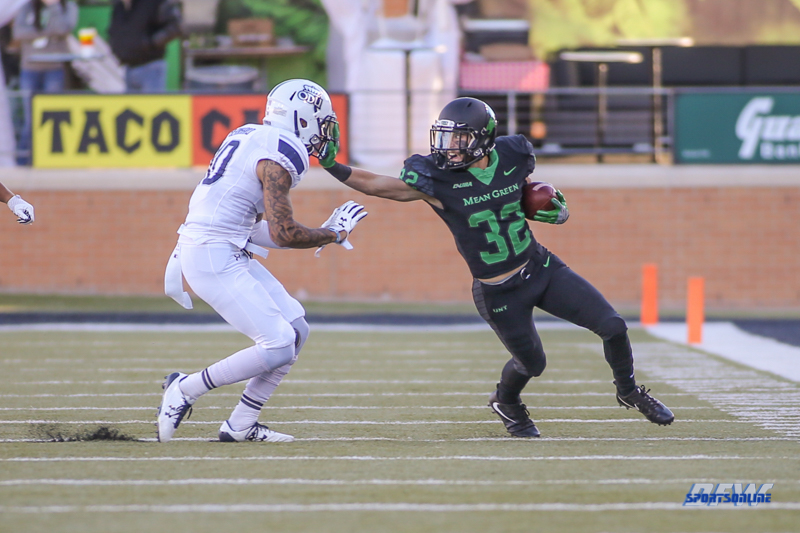 
It began with a sack by the Mean Green’s Joe Ozougwu and Tillman Johnson which resulted in a fumble that LaDarius Hamiltonrecovered, setting up a game-tying field goal from Trevor Moore. On the Monarchs’ next possession, on fourth-and-one from the ODU 48, North Texas defensive end Andy Flusche shot into the Monarchs’ backfield to stop running back Jeremy Cox and turn the ball over on downs to UNT. Four plays later, Mean Green running back Nic Smith scored the go-ahead touchdown on a 20-yard run.

“Last week we had lapses in focus,” Flusche said. “This week we went back to work and got back to our roots.”

North Texas dominated the majority of play in the first half, out-gaining the Monarchs, 284-149, to build double-digit leads. But the Mean Green could not make those advantages stand up.

North Texas rolled up 35 points in the first half through all three phases of the game. Quarterback Mason Fine completed his first 10 passes and 15 of his first 16 for 180 yards, and the Mean Green scored touchdowns on its first two drives. UNT blocked two punts in the second quarter, one by Taylor Robinson that Evan Johnsonreturned for a touchdown and one by E.J. Ejiya, and Flusche got his first career interception to set up a 1-yard touchdown dive from Smith.

But much of that production was offset when Old Dominion (0-4, 2-6) returned two kickoffs for touchdowns, got a spectacular one-handed interception from Joe Joe Headen leading to a 45-yard field goal, recovered a North Texas fumble to set up a 28-yard field goal, and picked up a first down with a fake punt to add a 34-yard field goal to pull within 35-23 at halftime.

Old Dominion then controlled the third quarter, amassing 163 yards of offense and scoring a pair of touchdowns, adding a two-point conversion after the second TD to grab a 38-35 lead and force yet another North Texas fourth-quarter comeback.

“We can’t lose focus in the middle of the game” Fine said. “I’m tired of learning how to win close games. I want to learn how to put teams away.”