“We’re all playing very good right now,” said UNT captain Maria Kononova. “Everyone in the lineup is playing strong and filling in for spots when needed.” 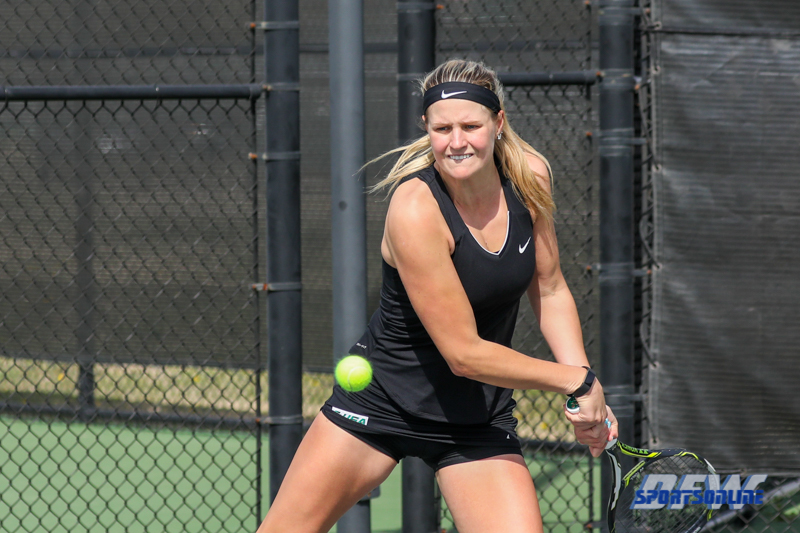 Saturday, Kononova returned to the lineup after missing their last match and the No. 43 nationally ranked player didn’t miss a beat. She and her doubles partner Minying Liangpowered their way to a 6-4 doubles win, which set the tone and put Ivana Babic and Alexandra Heczey in a position to clinch the doubles point victory at No. 2, which Heczey and Babic accomplished soon after with a 6-4 win.


In singles, Kononova again helped set the tone early by jumping out to an early lead in the first set. Cool, calm and collected, Kononova overcame her opponent’s fierce first set comeback and then put her away with a dominating second-set performance. Kononova claimed the Mean Green’s first singles victory with a 6-4, 6-2 win.

“It felt good to be back on the court and contributing,” Kononova said. “I still don’t feel 100 percent but I was very happy with how I played and how the team played.”

Saturday, junior Tamuna Kutubidze who has a 7-3 singles record on the year was forced to sit out of the lineup due to a heavy fall competition schedule. In her replacement, Liang played in Kutubidze’s No. 2 spot and Heczey moved up to the No. 3 spot.

Heczey, who played on Thursday at No. 3 due to Kononova’s departure from the lineup, won her second-straight match on Saturday. Heczey, who began the year outside of the six-woman rotation and lost her first three matches of the year at No. 6, has now improved to 3-0 at the No. 3 position and for two straight matches has clinched the Mean Green’s win.

“She’s improved a lot this year,” Kononova said of Heczey. “She’s playing way more tactical and her backhand is much stronger.”

Right before Heczey clinched the win, Liang gave UNT an important 3-0 lead with a 6-2, 6-4 win as the top-half of the Mean Green’s lineup went 3-0 on Saturday and won every match in straight sets.

Two-straight wins is important for this Mean Green team as they hit the road this week and face a strong Boston University team on Saturday and then the Conference USA’s top-dog Old Dominion on Sunday in Norfolk, Virginia.

With the win Saturday, UNT improved to 5-3 at home this season. They have finished nine of the last 10 seasons with a winning record at home. They have two home matches left this year. Its next home match is on March 31 versus Memphis and they’ll look to make it 11 of the last 12 years.