Sophomore Alexandra Heczey clinched the victory for North Texas with a 6-4, 2-6, 6-3 singles win at the third spot in the lineup.

“I got a little nervous in the second set and she was slicing it really well and using the wind to her advantage,” Heczey said. “But my serve was working really well and I was able to stay on the attack.” 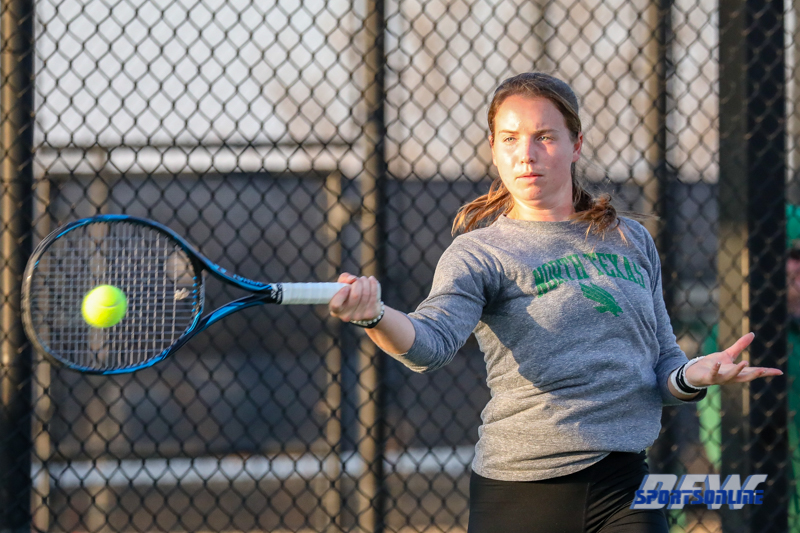 For Heczey, Thursday’s win at No. 3 was a culmination of a lot of hard work this season. The sophomore began the year completely out of the lineup but has not only worked her way back into the lineup bur she’s now in the top-half and playing a key role in clinching victories.


“I’m pretty proud of myself,” Heczey said with a smile. “Anyway I can help the team win.”

Thursday’s win ends a four-match skid by the Mean Green (5-9) who battled early morning wind conditions with Georgia State (7-10) at the Waranch Tennis Complex but also used it to their advantage.

“When we had the opportunity we had to take advantage of playing with the wind to our backs and I think we did that,” Heczey said.

Playing at the No. 1 position, junior Tamuna Kutubidze won seven deuce points on her way to pick up the Mean Green’s first singles win on the day with a 6-4, 6-0 straight win over the Panthers’ No. 1

Haruka Sasaki captured North Texas’ fifth point with a high-energy victory at the No. 5 position in the lineup. Sasaki and her innocent-looking smile forced her Panther competitor to labor with continuous winners and constant energy.

“We deserved this,” said Heczey. “We’ve worked really hard and have done everything right. We know if we continue to work hard more wins will come.”