ARLINGTON, Texas — A slew of USC turnovers, along with the sticky hands of safety Damon Webb, helped propel No. 5 Ohio State to a dominant 24-7 victory over No. 8 USC in the Goodyear Cotton Bowl Classic on Friday night at AT&T Stadium.
In a classic clash of college football bluebloods that normally takes place on the West Coast, two takeaways by Webb were key to the Buckeyes taking control early.
Buckeyes quarterback J.T. Barrett also contributed two touchdown runs for the Big Ten champions, who were just on the outside of the College Football Playoff and finished the season 12-2. 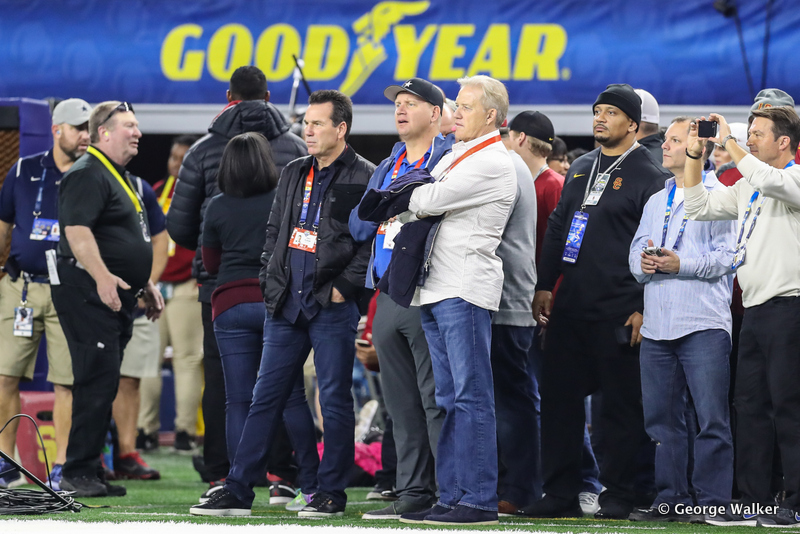 ARLINGTON, TX - DECEMBER 29: John Elway on the sidelines prior to the Goodyear Cotton Bowl Classic between Ohio State and USC on December 29, 2017, at AT&T Stadium in Arlington, TX. (Photo by George Walker/Icon Sportswire)


“I don’t use it very often, but I love this team,” Ohio State coach Urban Meyer said. “I love the leaders on this team. To send them out Cotton Bowl champions, arguably maybe a Top 5 finish, that’s a heck of a year.”
Trojans quarterback Sam Darnold had a forgettable showing in what could be his final collegiate game. The sophomore didn’t throw a touchdown pass and turned it over three times, including an interception that was returned for a touchdown by Webb.
USC finished with four turnovers, three in the first half.


“Any time that you turn the ball over three times, especially two in the negative yardage area, you’re putting a hurt on your defense and it led to points early in the game and a separation early in the game,” USC coach Clay Helton said.
Darnold (26 of 45 for 356 yards, one interception) did become the first USC player to pass for 4,000 yards in a season. He was sacked eight times.
Darnold wasn’t ready divulge his plans for next season, but acknowledged a decision is coming.
“Just talking to my family, talking to coaches, people who have been in my position before,” he said. “And that’s kind of how I’ll go about it.”
Turnovers and pressure on Darnold carried the Buckeyes despite only 277 yards of offense.
“USC is a heck of a football team,” Meyer said. “Their defense really did a good job against us. Our defensive line won that game and secondary. That quarterback, I have a lot of respect for him, but the best way to disrupt a quarterback is get after him and we did.”
The Trojans (11-3) also had a seven-game winning streak in the series snapped. The last Ohio State win over USC had been in the 1974 Rose Bowl.
The misery started quickly for the Pac-10 champions, who turned it over on their first possession as Deontay Burnett fumbled after his first catch. Webb scooped up the loose ball and returned it to the USC 19.
Barrett finished off the short drive with a keeper from the 1.
A long march by the Buckeyes ended in a short field goal for a 10-0 lead early in the second quarter. Seconds later Webb struck again by jumping a route for a 23-yard pick-6 off Darnold.
Darnold’s lost fumble later in the quarter resulted in another Barrett scoring run, as Ohio State went up 24-0.
Barrett, the holder of multiple program and Big Ten records, finished his career with a 38-6 record as a starter.
USC did get on the board before halftime after the Buckeyes lost the ball on a muffed punt. Ronald Jones raced in from a yard out for his 19th touchdown, as Ohio State went into the locker room down 24-7.
Barrett, who finished 11 of 17 for 114 passing yards while rushing for 66 more yards, and the Ohio State offense nursed the 17-point lead in the second half by staying conservative, running clock and punting it away. The defense did the rest.
Burnett set a Cotton Bowl-record with 12 receptions for 139 yards for the Trojans, but his early fumble had a greater impact.