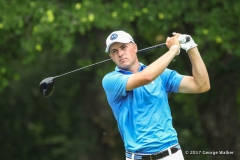 Live hole-by-hole coverage, which SiriusXM will co-produce with Westwood One, will air from 12:00 pm-7:00 pm ET all four days of Championship play, for a total of 28 hours of live coverage from the course on satellite radios and on the SiriusXM app.

The broadcast will be hosted by play-by-play voice Taylor Zarzour, with PGA Professional Charlie Rymer serving as the analyst in the booth. Former tour professionals Mark Carnevale, John Maginnes and Dennis Paulson, and broadcasters Fred Albers, Doug Bell and Bill Rosinski will provide live commentary from around the course.

“Golf fans will get an exceptional level of coverage of the year’s final major, which annually features one of the strongest fields in golf,” said Scott Greenstein, SiriusXM’s President and Chief Content Officer. “With four days of play-by-play from Quail Hollow and exclusive shows hosted by two-time PGA Championship-winner Dave Stockton, PGA of America president Pete Bevacqua and more of the game’s greats, our listeners will get an excellent perspective on the course, the event and the competitors.”


Beyond the play-by-play coverage, SiriusXM will provide fans with an extensive schedule of daily golf talk and PGA Championship analysis throughout Championship week:

Four days of hole-by-hole coverage, co-produced by SiriusXM and Westwood One, from the Quail Hollow Club in Charlotte August 10-13