ARLINGTON, Texas — The Oakland A’s don’t want this season to end, especially the way they’re playing right now.
It’s the complete opposite for the Texas Rangers.
Those trends continued Thursday as Oakland handed Texas its seventh straight loss with a 4-1 victory behind the pitching of left-hander Sean Manaea. 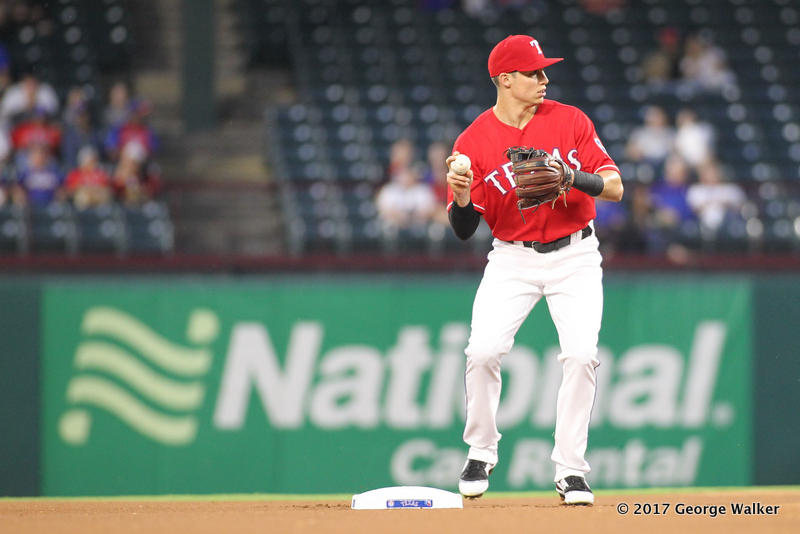 ARLINGTON, TX - SEPTEMBER 28: Texas Rangers third baseman Will Middlebrooks (15) during the game between the Texas Rangers and Oakland Athletics on September 28, 2017, at Globe Life Park in Arlington, TX (Photo by George Walker/Icon Sportswire)


Manaea (12-10) allowed just one unearned run win in 6 2/3 innings as the Athletics won for the ninth time in their last 11 games. Oakland has also won seven straight against the Rangers, their longest-winning streak vs. Texas since 2005.
Manaea, who was scratched from his previous turn in the rotation because of a left upper back strain, allowed just three singles and three walks. He struck out six.


Manaea has now won three of his last four starts, posting a 3.38 ERA in that span. He was able to move the ball around Thursday, which is something he has had to do this year. The Rangers had two singles against him in the first inning but had just one more hit the rest of his outing.
“Learning how to pitch without velocity,” he said. “My velo was down this year. It definitely taught me how to pitch, pitch inside and use my fastball. I learned a new pitch, which is a two-seam fastball that I never had before in my life.”
Oakland manager Bob Melvin has been impressed by the way Manaea has adapted as the season has gone on. His ERA since the All-Star break is up nearly two runs but he has still found a way to win five games.
“He’s not getting the swings and misses that he did earlier in the year, but it’s late in the year,” Melvin said. “This is the longest season he’s had to pitch through, and you find endurance and you reach down a little bit deeper this time of year. I think you’re seeing a guy that’s going to pitch way up in the rotation.”
He got all the offense he’d need in the sixth inning when Oakland broke a 1-1 tie. After Texas starter Miguel Gonzalez (8-13) retired the first two batters, Jed Lowrie and Khris Davis had back-to-back hits. Designated hitter Ryon Healy followed with a bloop single to center to score both runners.
Gonzalez gave up three runs on five hits in six innings.
“I felt good,” said Gonzalez. “I’m in control, in command both sides of the plate. The fifth and sixth innings I got in a little bit of trouble but that’s part of the game. They’ve got a bat, too. I need to make my pitches in that situation. I didn’t. They were able to capitalize. You tip your hat to them.”
Oakland added a run in the ninth on an RBI single from Matt Chapman, who finished 2-for-3 with two RBIs.
The A’s outhit Texas 9-4, with Davis and Healy also collecting two hits.
Texas left the bases loaded in the first inning and then again in the sixth when Liam Hendriks got Elvis Andrus to pop up to end the frame after coming on to replace Manaea.
Oakland got 2 1/3 scoreless innings from its bullpen, with Blake Treinen tossing the ninth for his 15th save.
The A’s gave Manaea a brief 1-0 lead when Chapman opened the fifth with a leadoff homer. It was just the second hit off Gonzalez.
The Rangers, who haven’t scored more than three runs in a game in their losing streak, tied the game in the bottom of the fifth on an RBI single by Drew Robinson. Willie Calhoun opened the inning by reaching second on a Marcus Semien error.
“I think the story again was the inability to plate runs,” said Texas manager Jeff Banister, whose team is without regulars Adrian Beltre, Carlos Gomez, Mike Napoli and Robinson Chirinos because of injuries. “I felt like the approach was there. We’re just not getting the run production.”