ARLINGTON, Texas — Seattle Mariners third baseman Kyle Seager has been a menace to the Texas Rangers throughout his career. 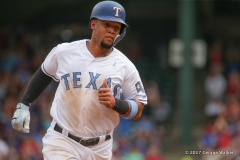 After going hitless in the first two games of the series, he returned to his menacing ways Sunday by going 3-for-5 with three doubles and three RBIs as the Mariners salvaged the finale with a 7-3 victory.
The win snapped a three-game losing streak for the Mariners and Texas lost for just the second time in nine games.
Seager came into the game a .318 hitter against the Rangers with 20 homers and 70 RBIs. He got things going early for Seattle, which did all the damage it would need by scoring four times off Texas starter Yu Darvish (6-5) with two outs in the first inning.
Seager’s RBI double got the Mariners on the board, scoring Ben Gamel. A passed ball scored Mitch Haniger from third and Danny Valencia followed with a two-run homer into the Seattle bullpen to up the lead to 4-0.


“Fortunately they didn’t catch them today,” Seager said. “I thought I had swung alright the previous two days; today, fortunately, hit it where they weren’t. Should have been trying to do that the whole time. We’ve seen him (Darvish) a good bit, too. So there’s been some plenty of days where we haven’t had any success off him. So it’s always nice when you can get a few runs off early.”
Texas got two of the runs back in the second on a two-run homer from Carlos Gomez off Christian Bergman (4-4). Those would be the only runs Bergman allowed in 5 2/3 innings of work as the Rangers managed just four hits off him. He struck out one and walked two.
The win for Bergman followed a start against Minnesota in which he allowed nine runs in 2 2/3 innings.
“It was great to get those early runs and settle in,” Bergman said. “They are a very aggressive team and I think if you look at their numbers they don’t hit offspeed real well. So we kind of had to adjust our plan and it ended up working pretty well.”
The Mariners tacked on another run against Darvish in the third on a double from Seager, who went 3-for-5 with three doubles and three RBI.
Darvish, who came into the game 5-0 lifetime against the Mariners at Globe Life Park, lasted just five innings and was charged with five runs on eight hits. He struck out six in matching his shortest outing of the season.
“The leadoff hitter (Gamel) was a blooper,” Darvish said. “With Haniger, the 2-2 slider was a good pitch and I didn’t get that call. With Seager, he doubled on 3-0. I put myself in situations where the hitter is going to get the pitch that they look for deep in the count. I think that caused me trouble. In the first inning, I had bad rhythm going and more time between pitches.”
The Rangers rallied in the seventh as Robinson Chirinos scored on a wild pitch. But with the bases loaded, Nick Vincent, the third Seattle pitcher in the seventh, got Nomar Mazara to fly out to center to cap a frame that included three walks, a hit batter, a balk and a wild pitch.
“There were some opportunities today,” said Texas manager Jeff Banister, who was ejected by Joe West for arguing a hit-by-pitch in the second inning. “Their guy (Bergman), from my vantage point, I had a really good seat and from the angle I was watching, he threw some good pitches, some quality pitches. Kept our guys off-balance. We hit some balls hard also that were outs.”
Seager got that run right back in the top of the eighth, doubling home Robinson Cano. An Elvis Andrus throwing error scored Seager and provided the Mariners more insurance.
Gamel and Cano each had two hits for Seattle. Gomez went 1-for-3 with two RBIs and scored a run for Texas as six Seattle pitchers combined to hold the Rangers to just four hits.