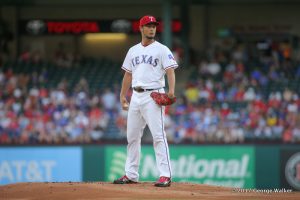 The 22-year-old Calhoun has batted .298 (111-373) with 24 doubles, 5 triples, 23 home runs, and 67 RBI in 99 games with Triple-A Oklahoma City in the Pacific Coast League. The left-handed batter and right-handed thrower ranks among the PCL leaders home runs (T3rd), RBI (12th), OPS (12th, .931), and doubles (T12th, 24) after entering the season as the 9th-youngest player in the league. Calhoun was tabbed the 69th-best prospect in MLB.com’s midseason prospect rankings and the 4th-best second baseman, although he has also seen action in left field for the OKC Dodgers. In 2016, Calhoun finished second in the Texas League with 27 home runs and was the second-hardest player to strikeout on the circuit (one per 8.6 plate appearances). He was selected by the Dodgers in the fourth round of the 2015 draft out of Yavapai College in Prescott, Arizona.

Davis, who turned 20 on Friday, was the Dodgers’ fifth round selection in the 2015 June draft out of Lakewood (Calif.) High School. He has combined for a .241 average with 9 home runs and 43 RBI in 94 games with Great Lakes (A) and Rancho Cucamonga (High-A). He has played primarily shortstop in his professional career, but has also seen time at third base and second base.

Scott, 25, has spent the season with Double-A Biloxi in the Southern League, posting a 4-6 record with 2 saves and a 2.34 ERA (16 ER/61.2 IP) over 42 relief outings. He has been assigned to Triple-A Round Rock. He began his career as a starter, but was moved to the bullpen in 2015. Scott has averaged 9.2 strikeouts per 9 innings this season, which would be the highest figure in any single campaign in his career. He pitched for the Salt River Rafters in the Arizona Fall League following the 2016 season, posting a 1.88 ERA (3 ER/14.1 IP) over 9 relief appearances.

Scott was born in Johannesburg, South Africa, and still resides in his native country in the offseason. He was originally selected by the Cubs in the fifth round of the 2011 June draft out of Notre Dame Prep High School in Scottsdale, Arizona.

Blackburn, 24, will be in uniform for tonight’s series opener with Seattle, seeking his major league debut. He was with the Giants for three days last season, but did not appear in a game. He has gone 4-2 with a 4.94 ERA (34/62.0 IP) over 13 games/12 starts for Triple-A Round Rock since being acquired in a trade with the San Francisco Giants on April 16. Prior to the trade, the right-hander made one start for Triple-A Sacramento in the Giants organization before he was designated for assignment on April 11. Blackburn has gone 1-0 with a 2.45 ERA (3 ER/11.0 IP) and 8 strikeouts against zero walks in his last 2 starts for the Express, including a quality start in his last outing on Tuesday at Sacramento (6.0 IP, 9 H, 3 R-ER, 0 BB, 0 HR, 6 SO, 100 pitches/61 strikes). The Amarillo native was selected by the Giants in the 16th round of the 2011 June draft out of Edmond Santa Fe High School in Edmond, Oklahoma.