DALLAS (AP) — Will Worth accounted for four touchdowns while becoming the first Navy quarterback with more than 100 yards rushing and 100 yards passing in three consecutive games as the Midshipmen beat SMU 75-31 on Saturday.

Worth ran 15 times for 107 yards and three touchdowns, increasing his FBS-leading total to 25 rushing scores while playing only three quarters. The senior was 5 of 7 for 104 yards and the go-ahead TD just before halftime. 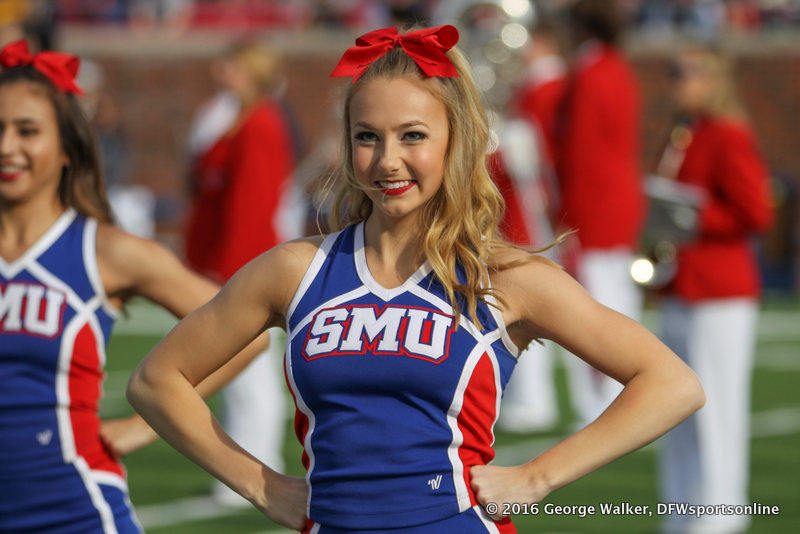 Dallas, TX - 11/26/16: SMU cheerleader during the NCAA football game between the SMU Mustangs and Navy Midshipmen on November 26, 2016 at Gerald J. Ford Stadium in Dallas, TX. (Photo by George Walker/DFWsportsonline)

The Midshipmen (9-2, 7-1 AAC), who had already clinched the West Division title, had a season-high 496 yards rushing and their most points since scoring 76 against East Carolina in 2010. They have consecutive 60-point games for the first time since 1917. They will play USF or Temple next Saturday in the American Athletic Conference championship game.

SMU (5-7, 3-5) missed a chance to become bowl eligible in its regular-season finale.

After Navy’s first lost fumble in five games led to a touchdown that put SMU up 24-21 late in the first half, the Midshipmen responded with 47 unanswered points.

Worth’s 8-yard TD pass to Jamir Tillman with 6 seconds left in the first half put the Midshipmen ahead to stay. They then scored twice in less than a minute right after halftime, on 255-yard fullback Shawn White’s 50-yard run and Justin North’s 25-yard interception return.