DALLAS (SMU) – SMU proved they more than belonged on the field with unbeaten No. 14 UCF. Down seven points, the defense came through with a huge stop to give the ball back to the offense with a chance to tie the game up. Unfortunately, the Mustangs were unable find the game-tying drive, falling 31-24.

The Mustangs provided UCF with its toughest test so far this season, becoming the first team to play the Knights to a one-score game.

“I’m not into moral victories. I didn’t come her for moral victories,” head coach Chad Morris said. “”These kids played their tails off. I’m extremely proud of the players.

DALLAS, TX - NOVEMBER 04: Southern Methodist Mustangs wide receiver James Proche (3) runs to the end zone for a touchdown during the game between SMU and UCF on November 4, 2017, at Gerald J. Ford Stadium in Dallas, TX. (Photo by George Walker/Icon Sportswire) 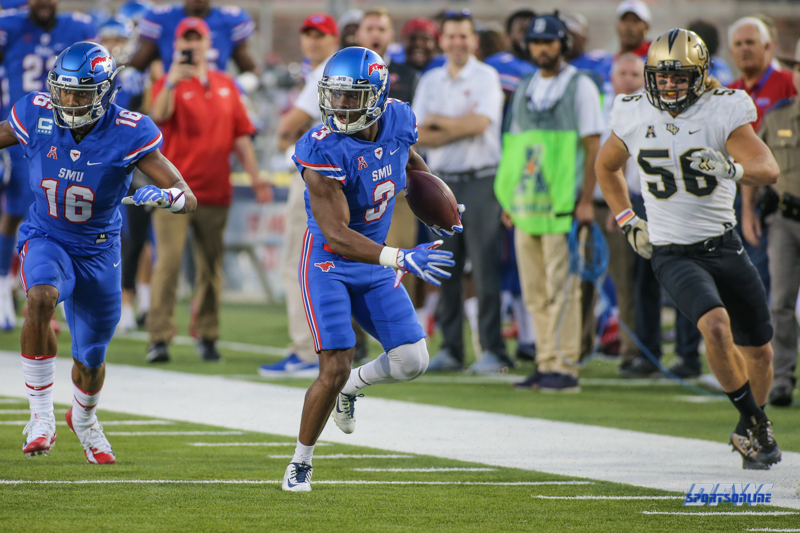 DALLAS, TX - NOVEMBER 04: Southern Methodist Mustangs wide receiver James Proche (3) runs to the end zone for a touchdown during the game between SMU and UCF on November 4, 2017, at Gerald J. Ford Stadium in Dallas, TX. (Photo by George Walker/Icon Sportswire)

Coming into this game, UCF was the nation’s top scoring offense. They were going to pick up some yards, but the SMU defense gave the Mustangs a chance to stay in the game. When the team needed a timely stop, the defense seemed to come up with a big play. The Knights’ 31 points tied the fewest they’ve scored this season.


A big part of that was the ability to force mistakes and turnovers. UCF turned the ball over five times in its first seven games. Tonight, the Mustang defense forced three, leading directly to 14 SMU points.

“I thought we played better defensively,” Morris said. “The yards didn’t show it. I think that’s the best effort we’ve seen defensively. That was much needed from a defensive standpoint. Their want-to had to prevail. We knew it was going to take a great, collective effort. It showed tonight. We came up on the short end, but our kids played extremely hard.”

SMU had some uncharacteristic mistakes that proved to be the difference in the game. A fumble going into the end zone took away a touchdown drive, and the Mustangs struggled with some drops throughout the game.

“We felt like if we could get them late in the fourth quarter, we could win it. We did,” Morris said. “We can play with anybody in the country, but the one team we can’t beat is SMU. We fumbled going into the end zone. We had some uncharacteristic drops. That hasn’t happened all year long. Those kids gave effort though.”

While the loss stings, SMU still sits in a good spot in the AAC East. The Mustangs only have once more loss than the division-leading Memphis Tigers, and they still remain on the schedule.

“Regardless of the outcome of tonight’s game, we still control our own destiny in our division,” Morris said. “We still have to play Memphis, Navy and Tulane. If you can win out, you win your side and get a chance to play these guys again. We have to keep that want-to, desire and drive that we showed tonight the rest of the year.”