DALLAS (SMU) – Led by gritty performances from Anzhelika Shapovalova and Karina Traxler, the No. 5 seed Mustangs upset top-seeded UCF, 4-3, in a thrilling finish Friday at the SMU Tennis Complex. SMU will advance to its first American Athletic Conference Championship match and play for its first conference title since 2009 Saturday at 4 p.m.

The upset over the No. 21-ranked team in the nation marked the ninth straight win for the Mustangs as they continue to roll through the conference tournament. It was the team’s first victory over a ranked opponent this season, and came at the perfect time. 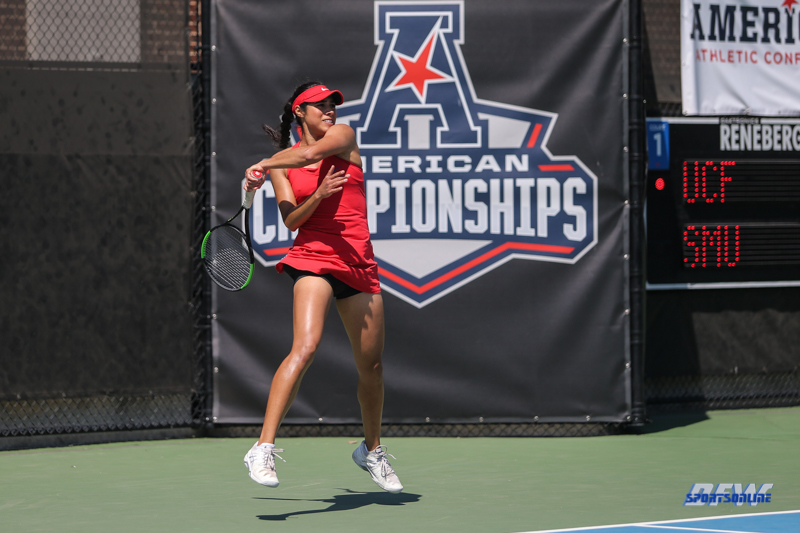 “The confidence level is very high,” said head coach Kati Gyulai. “We’re going all the way. We’re very happy right now, but we still have to face another winner. We’ve got another one to go tomorrow.”


The Mustangs dropped the doubles point for the second time in two matches but, just as they did in the quarterfinal round, rebounded to force UCF into a tight match.

Tiffany Hollebeck led off the charge with a quick 6-2, 6-3 win at No. 6 in her first singles lineup appearance of the tournament. SMU surrendered a point to the Knights with a 6-3, 6-4 loss at No. 2, but continued to push back against the top-seeded foe.

Sarai Monarrez Yesaki stayed calm and collected through three sets against Natalia Serrano to pull out a 6-3, 2-6, 6-2 finish. With the match tied at two apiece, Traxler found momentum against Maria Martinez at the top position. She collected a 6-4, 2-6, 6-1 win to give the Mustangs their first lead of the match.

The match tied up again when Ana Perez-Lopez was unable hold on at No. 4 after taking the first set. All eyes turned to Shapovalova at No. 3, who had a 4-2 lead in the final set. The junior allowed UCF to claim two unanswered games, but continued to show resilience. It paid off when she took the match, 6-1, 4-6, 6-4 to propel the Mustangs for a chance at the conference title.

The Mustangs will face No. 2-seed and No. 26-ranked Tulsa Saturday at 4 p.m. in the championship match. SMU dropped a tough 4-0 road match to the Golden Hurricane in February.