DALLAS (SMU) – After yesterday’s practice, senior McKenzie Adams didn’t feel great about her shot. She stayed around after practice, making 150 shots before leaving the gym. It led to the best game of her Mustang career on Friday.

DALLAS, TX - NOVEMBER 10: SMU controls the tip-off during the women's basketball game between SMU and Nicholls on November 10, 2017, at Moody Coliseum, in Dallas, TX. (Photo by George Walker/DFWsportsonline) 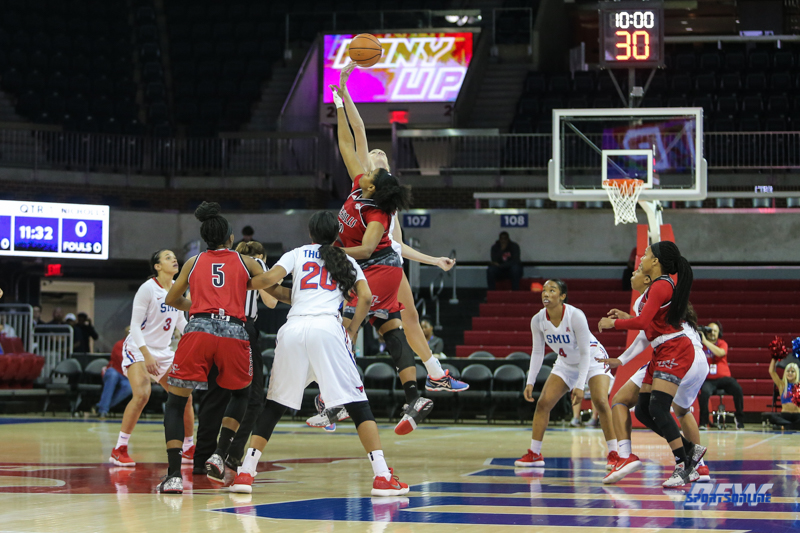 DALLAS, TX - NOVEMBER 10: SMU controls the tip-off during the women's basketball game between SMU and Nicholls on November 10, 2017, at Moody Coliseum, in Dallas, TX. (Photo by George Walker/DFWsportsonline)

Adams posted a career-high 38 points, the third-highest point total in program history, to lead SMU past Nicholls, 68-61. The Frisco, Texas, native tied the school record by hitting 16 of her 18 attempts at the free-throw line.

“A win is a win, and I’ll absolutely take it, especially the season opener,” head coach Travis Mays said. “(Adams had) 38 points, and we need every bit of it. At yesterday’s practice, she was complaining about her shot. I didn’t see anything wrong with it. It was about whether or not she was going to be aggressive and attack. After I left, she made 150 shots. It pays off.”

The Mustangs stormed back from an eight-point deficit in the second half, due in large part to stifling Nicholls in the second half. SMU held the Colonels to just 24 second-half points and under 16 percent from the floor. Nicholls managed just six second half field goals.


“We changed our defense in the third quarter to what we call three, and we extended it,” Mays said. “I think we took them a little bit out of their rhythm. Once we were able to slow them down and take a little of their confidence away, it looked like the confidence shifted from them to us.”

That defense turned into energy on the offensive end, and the Mustangs were able to erase the deficit by the end of the third quarter.

“We got a little more aggressive on the offensive end,” Mays said. “McKenzie made a couple 3s and got a couple fouls. The bench got excited, and it looked like SMU woke up. Once we woke up, we were able to compete well enough to get the victory.”

Junior Dai’ja Thomas was extremely active under the goal for SMU, grabbing a career-high 14 rebounds to lead the team.

“Dai’ja was our foundation and has been our foundation during the last month,” Mays said. “She’s practiced extremely hard. Those 14 rebounds don’t surprise me. I told her a few days ago in front of the team about how consistent she had been and the standard that she’s been setting. She’s an example for our younger players. That work paid off. You only get these results based on what you’ve been doing in practice.”

Career-high was a theme for the game for several Mustangs. Senior Mikayla Reese dished out a career-high six assists to lead the Mustangs in that category. Playing in the first game of her collegiate career, Ariana Whitfield was the Mustangs second-leading scorer with eight points.

With the win, Mays is now a perfect 2-0 in season openers as a head coach. The Mustangs are back at Moody Coliseum on Tuesday, hosting Metroplex rival TCU at 7 p.m.