via the Sports Xchange

DALLAS — Tyler Seguin scored twice and Dallas Stars coach Ken Hitchcock won his 800th game in a 4-0 victory over the Chicago Blackhawks on Thursday night at American Airlines Center.
Hitchcock became the third coach in NHL history with 800 wins, joining Blackhawks coach Joel Quenneville (868,) and Scotty Bowman (1,244).
After the game, Quenneville took a minute to congratulate Hitchcock.
“Congratulations from Joel means more than anything because we came up together and we’ve had so much mutual respect for each other and helped each other along the way when we were both kind of in the down and outs,” Hitchcock said. “I think coming from him it 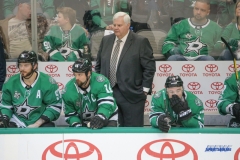 means more than the number, so it’s pretty special.”
Hitchcock has a career record of 800-488-88-114 with the Stars, Philadelphia Flyers, Columbus Blue Jackets, and St. Louis Blues. In two stints with Dallas, he has 296 of those victories.
“It’s great he’s coached so many games,” Stars forward Antoine Roussel said. “You want to do good for him and you want to pick up as many things as you can from him and the details and the preparation from the game make us better, sometimes (it’s) hard and at the end of day it’s real good for us.”
Jamie Benn and Roussel also scored to help Dallas (19-14-3) end a three-game losing streak.
Ben Bishop made 24 saves for his third shutout of the season.
“We just had a couple frustrating losses in overtime the last few games, so it’s nice to keep pushing there and finally break through and get the win in regulation,” Bishop said. “We had some guys step up and it’s always fun to win at home when there are so many other fans in the stands.”
Chicago (17-12-5) had a season-long five-game win streak come to an end.


“Being off a couple days, it looked like we were a little bit out of sorts as the game went on,” Quenneville said. “Playing two of the most complete games back to back all year, tonight there wasn’t trending in the right direction.”
Benn gave Dallas a 1-0 lead at 17:11 of the first period right after a power play expired. Remi Elie made a sharp pass across the crease to Benn, who easily scored his 15th goal of the season.
Roussel gave Dallas a 2-0 lead 1:07 into the second period on a deflection after a point shot by Dan Hamhuis.
Seguin scored for the first time in eight games and made it 3-0 on the power play at 5:55 of the second period. Seguin controlled a rebound after an initial shot by Jason Spezza and beat Corey Crawford with a backhand.
“It feels good especially when you’re in a bit of a slump, get your weight off your shoulders a bit,” Seguin said. “Felt like I was doing a lot of good things, some with bad puck luck, and then some stuff was catching up to me and I started cheating a bit definitely kept thinking about getting back to the basics, trying to be greasy and happy with tonight’s result.”
Seguin scored his second at 16:14 of the period for a 4-0 lead, finishing off a drive to the net by Devin Shore.
Chicago hit the post four times in the loss.
In the first period, Alex Debrincat had a short-side shot hit the left post after a faceoff win in the Stars zone. With 8:15 remaining in the period, Patrick Kane nearly scored after Bishop bobbled an initial shot, but he hit the post and Bishop recovered.
Brent Seabrook hit the post in the second period on a shot from the slot after Roussel had given Dallas a 2-0 lead. Nick Schmaltz also hit the post in the second period, this time the left one, when Bishop was sprawling.
“It really hurt us, two posts in the first period that could have put us in a better spot,” Quenneville said. “I thought we lost a lot of gas when they did score. We needed something like that to get us excited.”
Crawford made 18 saves and lost in regulation for the first time since Nov. 12.