Fort Worth, TX – Steve Stricker wins the 2009 Crowne Plaza Invitational at Colonial in a dramatic 2-hole playoff.   Stricker came from 2 strokes down on the final day to force a playoff with Tim Clark and Steve Marino.

Stricker, who shot 63 on both of the first days, closed the tournament out with a 68, for a 4-day total of 263.  After all three players hit par on the first playoff hole, Stricker managed a birdie on the 2nd playoff hole with a fabulous shot to the green.  Stricker talked about the pressure of the final holes, “There are a lot of things that creep into your mind and it’s tough to get them out, and you are dealing with swing issues and outside agencies that you can’t control at times; the wind or lie or whatever. But, you know, it just gets tense.  Everybody is on edge. That’s why it’s difficult.”

Tim Clark led all day until the 18th hole, when he had a bad shot off the tee. He almost recovered for the

championship with a great approach shot to the green, but could not get the putt to drop.  Again, in the first playoff hole, Clark missed the game-winning putt.  Clark was disappointed with the loss, “The tournament should have ended on the first playoff hole.  I didn’t make a confident stroke and I pulled it.”  Steve Marino felt the pain for Clark as well as himself, “I thought if I couldn’t make a couple of birdies coming in, I thought he was going to win. He seemed like he was rock solid.  He hit a bad tee shot on 18.  He gave himself a putt at it. I feel bad for Tim.  Tim is a good guy.  He is a hell of a player. He is definately going to win out here soon.”

Stricker knew he had to get some breaks today to win, “You need breaks to win out here, and I think that is why winning is so special. It’s so hard to do.  You know there are so many ups and downs through the course of the week, through the course of the last round and things just happened to turn all my way today.” Stricker continued, “So to be sitting here, I feel very fortunate. You know, it’s funny how things work out. I’ve been on the other end a couple, two or three times this year where you think you are going to win and all of a sudden didn’t.  Things don’t go your way and you end up losing.  So this one feels very good.”

With this victory, the 5th of his PGA TOUR career, Steve Stricker moves to 2nd in the FedEXCup standings. Zach Johnson remains the leader. Johnson finished tied for 9th. 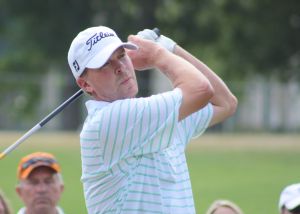 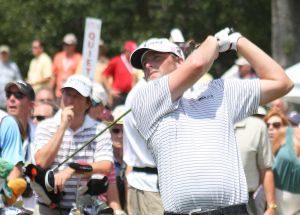