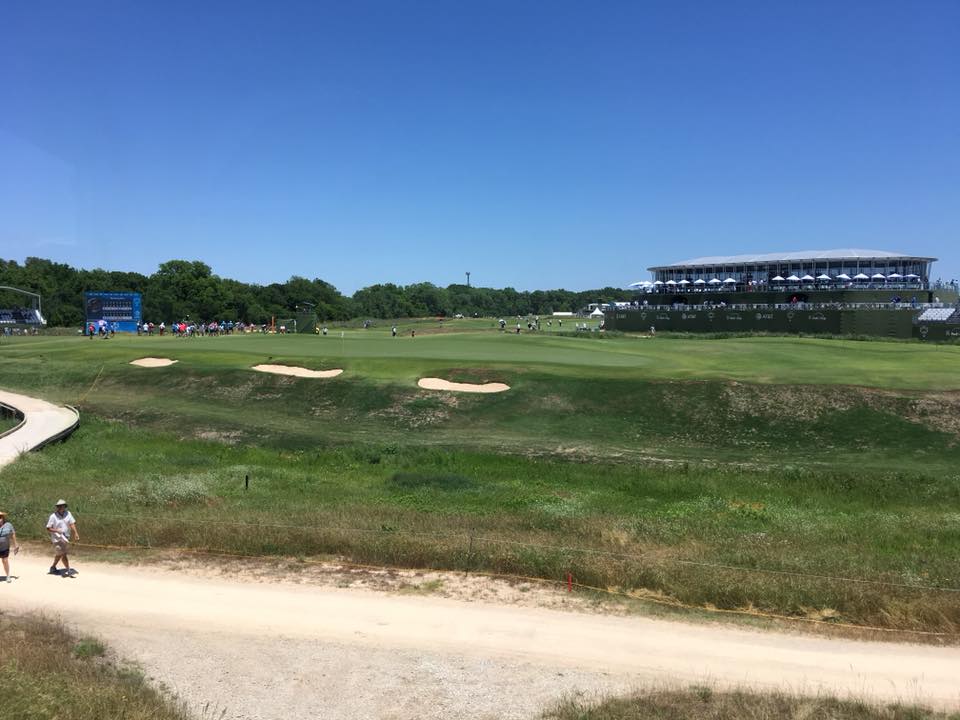 In case you missed it, the AT&T Byron Nelson left its longtime home of the posh TPC Four Seasons in Las Colinas and moved to the links-style Trinity Forest Golf Club in South Dallas.

Harrison Frazar, winner of the 2011 PGA Tour FedEx St. Jude Classic, is essentially the tournament liaison between Trinity Forest Golf Club and the PGA Tour event. He joined us in November 2017 to discuss the upcoming AT&T Byron Nelson and its new venue that was designed by Bil Coore and Ben Crenshaw.

JB: Trinity Forest is brand new for most people, can you describe what it for someone who has never seen it?

HF: The first thing about the golf course is that there are no trees and that’s a product of it being on top of a landfill. As a result of those two things, the golf course was designed and built to open, wide, wind-swept and dunesy. It’s meant to look old and be a step back in time. If you go back to the golden era of golf course design, the guys that were building the golf courses at the turn of the century on the east coast and the mid-Atlantic were all people that came from the UK, Scotland, Ireland, and for those guys, the land dictated what the golf course was going to be. They didn’t bring in millions of cubic yards of dirt, so when we saw this site and knew what it was going to be, we decided to take a step back and let the land tell us what it was going to be, hire the right architects to do that kind of stuff and they embraced the vision further. The golf course is going to look different for people who are not from here, it’s going to look different from anything else they’ve ever seen.

JB: You were introduced as a liaison, what does that entail?

HF: I’m technically still a professional golfer, but I came on board with these guys to help them with what this place was going to look like. A lot of the wheels had already been put in motion, and Jonas (Woods) our developer and Ron Spears, the other board member, were asking a lot of questions about tournament golf and about what happens and what are they looking for and the length, so when I tried to go back and play and it didn’t work, they said ‘why don’t you take a more official role with us and what can you be?’  I said I could be a tournament relations guy, a tournament liaison guy and answer questions. So I’m a guy that the Salesmanship Club can bounce ideas off of, the PGA Tour can bounce ideas off of about how we are going to set up, where are we going to put people, where are the stands going to go and what are some possibilities because I know every hump and bump of this place. The other part of what I do is I run charity events out here. I’m not a tournament director for the Byron Nelson, that’s Jon Drago, but I’m a tournament director for our events at Trinity Forest and I’m a bounce-back guy and contact point.

JB: Have you had any Tour players be critical about the new course?

HF: They give us a hard time about things like how different it is and what we are finding is that they come out once and they’re kind of liking the idea of it, but they don’t understand it, but they’re intrigued enough to come out again. When they come out again and as they start to open their mind to the strategy of the golf course, about the positioning it requires and the shots you have to hit. If they play two or three holes that second time around, they get it and they are intrigued even more. So much of the golf that we play is “Trackman Golf” where guys get on the range with their teachers and a Trackman and they make a swing and see that their 7-iron is curving, you know the average today is four yards a curve and it’s flying 178 yards. Then they go out to the golf course and plug that it and fly the ball from point A to point B. That is not going to work here. The players will have to go up and down and left to right, take spin off in some spots, add spin in others. There will be times when they think they can bomb a drive down to within 60 yards, but if they do that, they won’t be able to hold the green. So you’re going to have to pick your spots to where to hit a particular club. Those nuances will play out over time. Just like if you’re playing St. Andrews, nobody plays it once and says if that was anywhere but the home of golf, I’d want to go back everyday, but after you play it a bunch, you start falling in love with it. I don’t want to insinuate that we are St. Andrews, but it has that kind of effect on people in that the more you play it, the more you understand it and come to appreciate it.

JB: At the previous AT&T Byron Nelson venue, TPC Four Seasons, you were a player consultant when they did the renovation in 2007. Were you sad to see it leaving or was it maybe bittersweet since it was leaving for a place you are involved with now?

HF: Yes, but I knew that this was already happening so I jumped on board to help. But yes, Las Colinas and the Four Seasons have been amazing not just hosts and to the Salesmanship Club, but they’ve been amazing to me and amazing to a lot of people, so it was very hard to know that it was going to move and it is bittersweet. D.A. and Steve Wolford absolutely did their best job in 2007, nobody did anything wrong so-to-speak, it was just time for a change.

JB: From the glory days of the Nelson such as the stacked field in 2005 when all top 5 players in the world were here in DFW to some of the more recent years when the fields were not quite as strong, do you envision the new venue helping the strength of the field?

HF: I think it will, it’s going to be interesting. Year one, a lot of people are going to be curious. Just like anything that’s new and different, there’s going to be some that are going to love it and some that aren’t. On the flip side, I know there are a lot of players that will stay away from brand new venues because it’s unpredictable and they want to wait and let everybody else do it and hear about so that they can make a decision if they are going to spend a week there. I think we will really see significant field changes in years three and four to where we can work out the kinks and the players can talk about it because that will be a word of mouth thing. In all my years on the PGA Tour, very rarely was there a golf course that everybody loved and wanted to play. People could find things to complain about Augusta National and Riviera, but you’ll also find the same guy that absolutely loves PGA National or Innisbrook. That’s going to happen here and I think it would be foolish on our part to think that everybody is going to fall in love with it.

JB: Following up on your liaison role, can you be the word of mouth help recruit players to play the course?

HF: I am and I’ve had a lot of players reach out and say they wanted to come play if they are in town and I’m happy to facilitate, we’d love to have them come out. In the beginning, right when we opened, I was actively going out and getting guys to get feedback because at the time, we could pivot with some stuff. Now, there’s not a lot of room to pivot, but we are tweaking and I welcome the input, comments and thoughts.

JB: Tell me about the greens here at Trinity Forest, are they bent?

HF: They’re bermuda, Champions Bermuda. They are dense and tight and basically indestructable.

JB: How does one join Trinity Forest if they are so inclined?

HF: It’s a private golf club and the way to get in is invitation-only, There’s a committee in place, which I am not on, and invites are extended to people who can support charity golf, people that embrace this type of golf and people who are going to share our vision of growing the game and trying to help Dallas-Fort Worth golf. Part of the old throwback idea of a golf club is that you don’t need tee times, you show up and go play and sometimes you feel like you have to the whole golf course to yourself.