Texas Motor Speedway held it’s annual Media Day this week.  As is the norm this year, the message was all about the economy.

TMS President Eddie Gossage opened the session with tales and quotes of doom and gloom.  His message was powerful – motorsports are facing the greatest threat in history. Then he pointed out all his words and quotes were from Sports Illustrated in 1974. According to Gossage, the state of the sport is healthy.  Gossage pointed out that the economic crisis is hurting motorsports, as it is hurting all industries. He compared the struggles with that of the NFL and other professional sports leagues.   Gossage stated that all involved with motorsports, the drivers, owners, and promoters, must find a way to help the sport weather the storm.

To show his efforts, Gossage listed some of the ways Texas Motor Speedway is helping make the sport more affordable to fans:

– The lowest price ever for a reserved seat at TMS, the $20 Backstretch Buster.

– Lower prices on some items in Concession Stands

– Fans can continue to bring their own food and drinks in coolers.

Following Gossage, Indycar Series drivers Danica Patrick, Dario Franchetti, and Scott Dixon appeared via videoconference from Homestead, Florida, where the series is testing. Each driver also mentioned the economy and efforts they were making to keep the fans and sponsors happy.  Ms. Patrick stated “you can’t keep a good product down.”  She has high expectations this year with Michael Andretti calling her races. 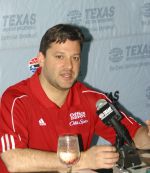 NASCAR superstars Tony Stewart and Ryan Newman were in attendance and fielded questions from Gossage, audience members, and the TMS website viewers. Stewart, who is co-owner of Stewart-Haas Racing, addressed the issue of the struggling economy and vowed to do everything he can to help the sport.   He was encouraged that new sponsors are willing to come into the sport and views that as a positive indication of the strength of NASCAR. Stewart’s new team just signed the second richest sponsorship contract in the history of the sport with Old Spice and Office Depot.

Stewart was asked several times to comment on the tires provided by Goodyear, which he has criticized in recent years. He would not comment other than to say he was not a tire engineer, therefore his opinion would not matter.  He went on to say that no one is trying to put an inferior product out there and he knows they are doing all they can to provide quality tires. His concern was that tires became an issue when they should not have.

Clearly, we have not heard the last of the economic problems, but NASCAR, at least, is smart enough to do more than just talk about it.  Time will tell if the fans will respond.