DALLAS — Zack Moss ran for 150 yards and Utah’s defense held West Virginia to six first downs in a 30-14 victory at the Heart of Dallas Bowl on Tuesday.
Quarterback Tyler Huntley added a pair of 2-yard touchdown runs and Matt Gay made three field goals for the Utes (7-6), who improved to 11-1 in bowl games under Kyle Whittingham.
“We’ve had several groups of guys come through here that take a lot of pride in their bowl performance,” Whittingham said. “This group was no different. Each subsequent group doesn’t want to be the group that lets the previous groups down. They want to keep that bowl prowess alive.”

DALLAS, TX - DECEMBER 26: Utah Utes running back Zack Moss (2) runs into the line during the Zaxby's Heart of Dallas Bowl game between Utah and West Virginia on December 26, 2017, at Cotton Bowl Stadium in Dallas, TX. (Photo by George Walker/DFWsportsonline) 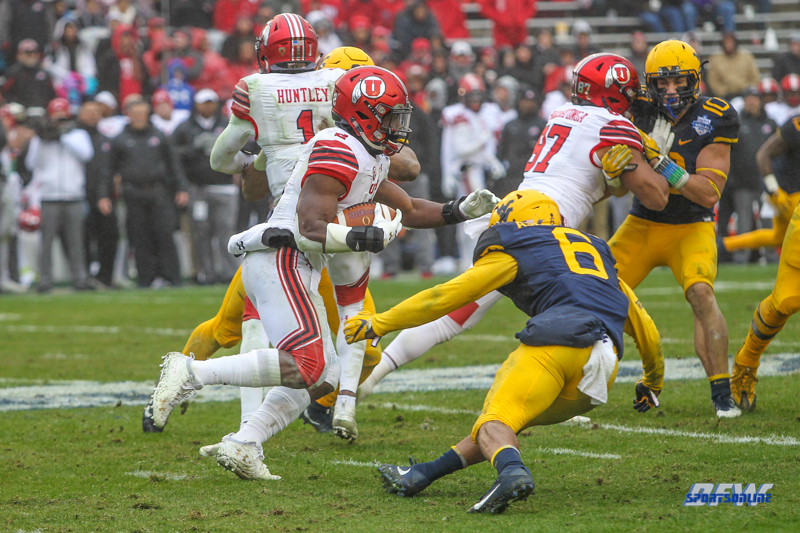 DALLAS, TX - DECEMBER 26: Utah Utes running back Zack Moss (2) runs into the line during the Zaxby's Heart of Dallas Bowl game between Utah and West Virginia on December 26, 2017, at Cotton Bowl Stadium in Dallas, TX. (Photo by George Walker/DFWsportsonline)


West Virginia (7-6), its offense decimated by injuries to three starters and a decision by 1,000-yard rusher Justin Crawford to skip the bowl, finished the season on a three-game losing skid.
“A pretty disappointing loss to end a disappointing season,” said Mountaineers coach Dana Holgorsen.
The late-season slide occurred after starting quarterback Will Grier suffered a dislocated finger on his throwing hand against Texas on Nov. 18. Grier was on the sideline in sweats this time as West Virginia managed only 153 yards.
Sophomore backup Chris Chugunov struggled to 9-of-28 passing for 129 yards with two interceptions, both by cornerback Julian Blackmon, who earned game MVP honors.


“We were here to play and dominate and I feel like that’s what we did,” Blackmon said.
Huntley completed 12 of 26 for 165 yards and lost a fumble, though the running game provided Utah with the balance West Virginia lacked.
Moss dashed through the middle for a 58-yard score on the Utes’ first series.
“It was very important for us to come out of the gates with a big play early on and set the tone,” he said.
Capitalizing on a fumbled punt by West Virginia’s Marcus Simms, Utah drove only 13 yards to score its second touchdown. Huntley carried out a goal-line play fake to make it 14-3.
Utah’s defense dominated, holding West Virginia to 2 of 14 on third downs. In one stretch spanning the second through fourth quarters, the Utes did not yield a first down on 10 consecutive possessions.
One of those three-and-outs came after the Mountaineers enveloped Utes punter Mitch Wishnowsky, stripped the ball loose and started at the 9-yard line. That led to nothing more than a field goal.
“I thought the defense really controlled the game from start to finish,” Whittingham said.
In danger of matching their fewest points ever in a bowl game, the Mountaineers scored on Chugunov’s 18-yard pass to Ka’Raun White with 1:58 left. Running back Kennedy McKoy tacked on a two-point pass to tight end Trevon Wesco.
McKoy finished with 31 yards on 14 carries as West Virginia’s ground game never gained traction in the absence of its two top linemen, Yodny Cajuste and Kyle Bosch.
“I was worried about us up front,” said Mountaineers offensive coordinator Jake Spavital. “I thought (Utah) controlled the line of scrimmage. We couldn’t get any run game popping. We were max-pro — when they were rushing four and we were blocking with seven — and they were getting some unnecessary hits on Chugs.”
Targeted four times, West Virginia’s David Sills was held without a catch for the first time this season. The Biletnikoff finalist closed the year with 18 touchdown catches, none after Grier’s injury.