Irving – Jason Day had rough final round, shooting a 2-over par 72.  It was enough, though, to hang on to the tournament win at -10.  Day was relieved it was over, “To finally come through with a win, I’m just so happy that I had the family and friends in town, and their support, and the DFW area, their support as well, and I’m just so pumped that I got it done. Thanks”  It is Day’s first career TOUR victory, and with it comes a check for $1,170,000.

Blake Adams finished tied for 2nd after battling with Day the entire course.  Adams briefly took the lead with a birdie on 10 to go 11-under.  Unfortunately, he gave it right back with a bogey on hole 11.   Going into the final hole, down by a shot, Adams hit the tee shot off to the right and then dropped the next into the water for a double-bogey.   The PGA TOUR rookie overall was pleased with his result, “I can’t complain.  I had a chance to win, didn’t.  You know, I just didn’t hit it very well again.”

Tied with Adams for 2nd are Brian Gay and Scott Overton.  Gay had the best round of the day, a 7-under par 63.  His tournament total of -8 was only 2 shots behind the leader, despite beginning the final round 11 shots down.

Rounding out the top-10 are Scott Verplank and Cameron Beckman, tied for 5th, and Ben Crane, Dustin Johnson, D.A. Points, and Arjun Atwal tied for 7th. 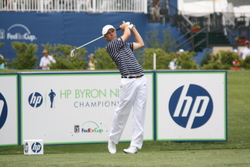 Most of the crowd of 80,000 were following the hottest story of the week – 16 year old amatuer Jordan Spieth.  Spieth started the day at 6-under, but rapidly went downhill, bogeying holes 2 and 3.  “I stressed yesterday that I needed to get off to a good start,” Spieth said, “And not even close to a decent start, so I never really got to feed off the crowd to get into it.”  Spieth eventually got into a groove and made birdies on 3 out of 4 holes to get to -7 after 10.  Then the wheels came loose, if not off.  Spieth bogeyed 13, double-bogeyed 15, and ended with a bogey on 18 to finish the round at 2-over par and the tournament at 4-under for a tie for 16th place.  Not bad for a high school student who is just trying to learn from the pros, “I just tried to learn from them, look at what they were doing.” stated Spieth referring to playing with veterans Tom Pernice Jr. and Corey Pavin, “It was all business out there.  They remain neutral, they know that they can’t get too excited or too down on themselves, and I did today, I got way too down on myself  early, and then I got way too excited at some point in the round, too, and it messed me up a little bit.”  Spieth would have earned $91,185.71 if he had played as a professional rather than amateur.