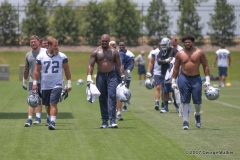 Dallas Cowboys starters had surgery last week.
Defensive tackle Maliek Collins underwent surgery for a stress fracture in his left foot, and right guard Zack Martin had arthroscopic surgery on his right elbow.
Martin’s surgery will cause him to miss the Pro Bowl, but both players are expected to be ready for offseason workouts.
Martin is entering the final year of his five-year rookie contract, and he is scheduled to make $9.3 million in 2018. The injury is not expected to affect any contract talks. Martin has not missed a game in his four seasons in the NFL.


Collins started all 16 games for the Cowboys this past season and had 22 tackles and 2.5 sacks. Collins had similar surgery on his right foot prior to his rookie season of 2016, but he started 14 of 16 games that year.
Cowboys left tackle Tyron Smith is also expected to miss the Pro Bowl after a sprained lateral collateral ligament in his right knee put him on injured reserve to end the season.
Smith missed three games because of injuries.