ARLINGTON, Tex. — The Los Angeles Rams’ quality start to this season improved a notch as they dominated the Dallas Cowboys in the second half to post their second straight road victory.
Rams running back Todd Gurley rushed for 121 yards and caught a 53-yard touchdown pass, lifting Los Angeles to a 35-30 victory over the Cowboys on Sunday at AT&T Stadium.
Los Angeles boosted its record to 3-1, matching its start in 2016. But the Rams are aware that they finished the season on a major slump and ended up 4-12. 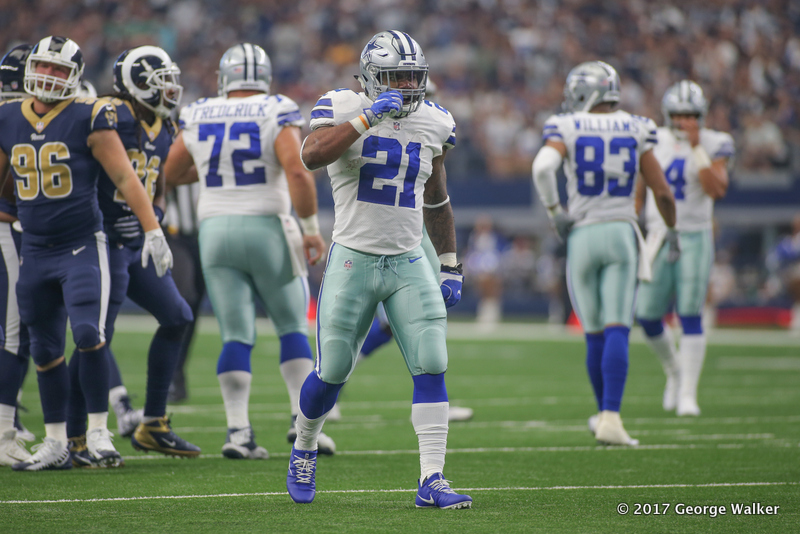 ARLINGTON, TX - OCTOBER 01: Dallas Cowboys running back Ezekiel Elliott (21) gestures "feed me" during the game between the Dallas Cowboys and the Los Angeles Rams on October 1, 2017 at AT&T Stadium in Arlington, TX. (Photo by George Walker/Icon Sportswire)


“It is only the beginning,” Gurley said. “We’ve been here last year at 3-1. We only won one game after that, so we’ve got to keep that in mind.”
Los Angeles quarterback Jared Goff, who finished with 255 passing yards and two touchdowns, picked apart the Dallas defense as the Rams outscored the Cowboys 19-6 in the third and fourth quarters.
The Rams switched the momentum to their side midway through the third quarter when Goff and Gurley combined for the key plays on a four-play, 90-yard touchdown drive.
Gurley ran for 26 yards on first-and-10 from the Los Angeles 10 to ignite the key march. Goff helped finish it by hitting Gurley in the middle of the field and Gurley ran away from the Cowboys defense for a 53-yard touchdown.
“That’s a play we worked on a pretty good amount this week,” Goff said. “We hit it in practice a couple times. Sure enough, it gets called in the game and you kind of perk up a little bit. Todd runs the route just the way he’s supposed to. We got the coverage we wanted and made the play.”


Gurley’s long touchdown play and kicker Greg Zuerlein’s earlier 30-yard field goal led Los Angeles’ third-quarter push to grab its first lead at 26-24. Zuerlein added kicks from 28 and 43 yards in the fourth quarter to push the Rams’ largest lead to eight points.
Zuerlein made a career-best seven field goals, making all his attempts, with a long of 49 yards. He drew praise from both Goff and Rams head coach Sean McVay. Zuerlein is the seventh player in league history to have seven field goals in a game. The record is held by former Titans kicker Rob Bironas, who had eight on Oct. 21, 2007, against Houston.
The Cowboys’ defense couldn’t keep Los Angeles out of field-goal range.
“It’s just a matter of getting off the field,” Dallas linebacker Jaylon Smith said. “It’s something that we have to do in the NFL. This league is so great and if you can’t get off the field, bad things happen.”
Cowboys quarterback Dak Prescott threw a 28-yard touchdown pass to tight end James Hanna to cut the Rams’ lead to two points, but Dallas couldn’t tie the game as Prescott’s two-point pass to Terrance Williams fell incomplete.
Los Angeles’ defense held Dallas (2-2) to 153 yards and six points in the second half after the Cowboys scored on every possession of the first half. As a result, McVay said defensive coordinator Wade Phillips, the Cowboys’ head coach from 2007-2010, earned a game ball.
“Real credit to Coach Wade and his staff where they made some adjustments at halftime,” McVay said. “Guys stood up and they were much more efficient on early downs and they got them into known passing situations.”
In the other locker room, Prescott was left wondering how Dallas could be so efficient in the first half only to fizzle late.
“It’s frustrating,” Prescott said. “We come out, we’re on fire and we’re feeling good. Then we go into halftime and come back and it is not the same.”
The Cowboys came close to controlling the game in the first half when running back Ezekiel Elliott’s second touchdown of the second quarter put them in front 17-6.
Dallas running back Alfred Morris broke loose for a 70-yard run to the Rams’ 5, setting up Elliott’s 1-yard touchdown surge four plays later.
The Cowboys’ defense then forced Los Angeles to punt after just one first down on the Rams’ ensuing possession. At that point, the Los Angeles defense hadn’t stopped the Cowboys from scoring on a drive.
However, Dallas punt returner Ryan Switzer fumbled the punt and Rams cornerback Troy Hill recovered at the Dallas 18.
From there, Los Angeles needed five plays to score as Goff capped the short scoring drive with a 7-yard touchdown pass to wide receiver Cooper Kupp. The Rams’ touchdown off the turnover cut Dallas’ lead to 17-13 with 6:33 left before halftime.
The Cowboys answered with a nine-play, 75-yard touchdown drive, completing a 4-for-4 first half of scoring drives when their offense actually took the field. Prescott hit Brice Butler for a 10-yard touchdown pass to cap the march and put Dallas ahead 24-13 with 1:51 left before the break.
The Rams moved in for a Zuerlein 49-yard field goal as time expired in the second quarter to cut Dallas’ lead to 24-16 at halftime.