ARLINGTON, Texas — For the past two seasons, Oklahoma didn’t need the Big 12 Conference to conduct a championship game to win the league and prove they were the best of a very good bunch of teams.
This year, however, the Sooners had to take the extra step of capturing a final contest between the conference’s best two squads, so they went ahead and took care of business and did so emphatically. 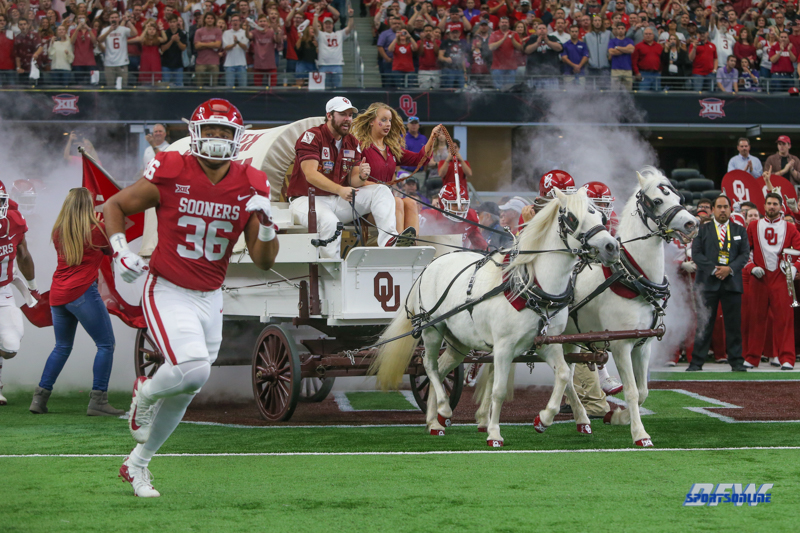 
Baker Mayfield passed for 243 yards and four touchdowns and ran for another 65 yards in leading No. 3 Oklahoma to a dominating 41-17 victory over No. 11 TCU on Saturday in the Big 12 Conference Championship game at AT&T Stadium.
The Sooners (12-1) won their third straight Big 12 championship and their 46th overall conference title while essentially clinching a spot in the College Football Playoff, in which they last played in 2015.


“This game was part of the journey to get to where we need to be,” Oklahoma coach Lincoln Riley said.
“We were just happy to be able to play another game as a group. It takes a lot to get to a championship game, but when you get here, you can’t be afraid to go out there and win them. I couldn’t be more proud about the way my team played.”
Mayfield, voted the game’s most valuable player, also strengthened his firm grip on the Heisman Trophy.
“I’m not focused on that, but the next week of events will be a lot of fun because I will be able to spend them with some of my teammates,” Mayfield said about the Heisman and the pomp and circumstance that leads up the revealing of the winner.
“I’ve said all along that I came back this season to win a national championship. The great thing is that we can control our own destiny.”
Oklahoma led just 24-17 after a first half that was even, statistically, but the Sooners ruled the second half, outgaining TCU 226-95 after halftime and shutting out the Horned Frogs. Oklahoma ran 12 consecutive rushing plays to eat up the final eight minutes of the game, putting a final stamp on the contest.
Rodney Anderson paced the Sooners’ rushing attack with 93 yards on 24 carries.
Kenny Hill led the Horned Frogs with 234 passing yards and two touchdowns. The Horned Frogs gained just 83 yards on the ground and had two costly turnovers.
“Oklahoma did a lot of things that made it difficult for us, especially in the second half,” Hill said. “They mixed their blitzes well and walked up their corners to help disguise their coverages. They just brought it, and stepped it up, and we didn’t.”
Oklahoma moved 51 yards in 13 plays on the game’s opening possession before settling for a 41-yard field goal by Austin Seibert. Then the Sooners got a gift as TCU running back Kyle Hicks fumbled on the Horned Frogs’ first offensive snap; Caleb Kelly corralled the bouncing ball and returned it 18 yards for a touchdown.
The Sooners added to their lead with a 5-yard TD pass from Mayfield to Mark Andrews to culminate a 10-play, 81-yard march that garnered Oklahoma a 17-0 advantage.
TCU answered, and then some, scoring twice in the first seven minutes of the second quarter to claw back to within 17-14. The first TD came when Hill lobbed a 29-yard touchdown pass over an Oklahoma defensive back and into the hands of Jalen Reagor. The second was even more spectacular as John Diarse snagged Hill’s 12-yard throw with his right hand while on tight coverage and got a knee on the ground before going out of bounds.
Mayfield and Andrews hooked up again for a 5-yard touchdown pass with 3:45 to play in the second quarter before Cole Bunce added 26-yard field goal in the half’s waning seconds to cut the Oklahoma lead to 24-17.
TCU hadn’t allowed a second-half touchdown its past six games, including against the Sooners in the regular-season meeting. Oklahoma discarded those trends in a flash, striking for a 55-yard TD pass from Mayfield to Mykel Jones on its first offensive snap of the third quarter to push OU’s lead to 31-17.
Mayfield added his fourth scoring play on the Sooners’ third play of the quarter, again going deep and finding Marquise Brown for a 52-yard scoring strike that all but finished off the Horned Frogs.
“The worst thing that could have happened in the third quarter happened: We didn’t keep the ball and then they went and scored,” TCU coach Gary Patterson said. “We gave up two big plays on breakdowns early in the third quarter and that ultimately was the difference in the game. Oklahoma is a very good team and we made too many mistakes to beat them.”