Dallas, TX – The Dallas Stars™ will host the 2018 NHL Draft™ at American Airlines Center, the National Hockey League, Stars and City of Dallas announced Saturday. The 2018 event will mark the first time the Stars and the City of Dallas will host the NHL Draft. The Dallas Stars franchise will celebrate the organization’s 25th anniversary during the upcoming 2017-18 season, and will host special events throughout the year to commemorate the Club’s milestone. 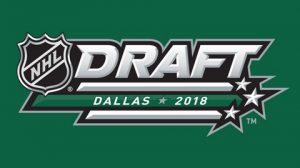 The 2018 NHL Draft™ will be held over two days – Friday, June 22 (Round 1) and Saturday, June 23 (Rounds 2-7). NHL club executives, scouts and coaches will be present on the NHL Draft floor while thousands of fans and hundreds of print, television and radio media are expected to attend.

“Players born in 2000 will be the focus of the first Draft of our second century,” NHL Commissioner Gary Bettman said. “Tomorrow’s NHL stars will skate into the spotlight when the 2018 NHL Draft brings the NHL family together at American Airlines Center, providing another highlight for the Dallas Stars’ 25th anniversary celebration.”

“The Stars organization is honored to host the 2018 NHL Draft during our 25th Anniversary season in Dallas,” Dallas Stars Owner and Governor Tom Gaglardi said. “Since our team moved to North Texas prior to the 1993-1994 season, we have been embraced by the community from day one and are lucky to have one of the most passionate fan bases in the NHL. Over the past 25 years, we have seen the tremendous growth of our sport through youth hockey programs, community involvement and grassroots efforts in the greater Southwest region. The 2018 NHL Draft will serve as a showcase for the next generation of international NHL talent and celebrate the success of hockey in the state of Texas.”

“On behalf of the city of Dallas, thank you to Commissioner Gary Bettman and the National Hockey League for selecting our city to host the 2018 NHL Draft,” Dallas Mayor Mike Rawlings said. “The Draft will generate an estimated $14 million in economic impact as we welcome fans from all 31 NHL clubs, members of the hockey community and potential draftees and their families from countries around the world. Our city being granted this honor is yet another example of how Dallas continues to be one of the most sought after locations to host first-class events.”

Ticket plans, related events and other details pertaining to the 2018 NHL Draft™ will be announced at a later date. For historical information and past draft selections, visit www.nhl.com/draft. NHL Network™ and NHL.com will provide extensive coverage live from the event leading up to and after the 2018 NHL Draft™. NHL Social™ will have exclusive coverage on all social platforms, and those looking to join the conversation can use the official hashtag #NHLDraft.