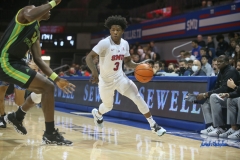 Davis has been on the 2021-22 Naismith Trophy Midseason Team, Wooden Award Watch List, Bob Cousy Point Guard of the Year Award Watch List and Lute Olson National Player of the Year Watch List. He was named the AAC Player of the Week three times this season and made the AAC Weekly Honor Roll seven other times. This is his third straight All-AAC season. He also made the All-AAC First Team in 2020-21 and third team in 2019-20.

The Mustangs are 22-7 overall, have won 19 of their last 23 overall and finished the regular season with a perfect 16-0 mark at Moody Coliseum. SMU went 13-4 in American Athletic Conference play to finish in second. The No. 2 seed Mustangs will play No. 7 seed Wichita State or No. 10 seed Tulsa in the Air Force Reserve AAC Championship quarterfinal round on Friday at 6 p.m. at Dickies Arena in Fort Worth. For tickets and other game information, visit SMUMustangs.com/gameday.