DALLAS – The NBA announced during its annual awards show that Mavericks guard/forward Luka Dončić was named the 2018-19 Kia NBA Rookie of the Year. He joins Jason Kidd as the only Mavericks ever to garner the award (Kidd shared the honor with Detroit’s Grant Hill in 1994-95), and also becomes the first international player who did not attend a U.S. high school or college to receive the honor since Spain’s Pau Gasol won it for Memphis in 2001-02.

Dončić (6-7, 218) averaged a team-high 21.2 points, 7.8 rebounds and a team-best 6.0 assists per game in 72 games (all starts) for Dallas this past season. He joined Oscar Robertson as the only rookies in NBA history to average at least 20 points, 7 rebounds and 6 assists per contest. 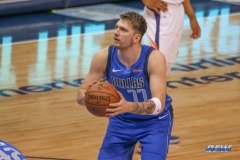 Dončić finished the season with eight triple-doubles, marking the third-most by a rookie in NBA history. Robertson (26 in 1960-61) and Ben Simmons (12 in 2017-18) are the only rookies to produce more. Dončić also broke Magic Johnson’s record (7) for the most triple-doubles by a player before his 21stbirthday (Dončić doesn’t turn 21 until Feb. 28, 2020).

The 6-7 guard/forward swept the Kia NBA Western Conference Rookie of the Month Award, winning it all five times it was given out (for October/November, December, January, February and March/April). He became the only Maverick to win the Rookie of the Month Award four-plus times in a season and the first player from either conference to sweep the award since Minnesota’s Karl-Anthony Towns in 2015-16.

The 20-year-old Slovenian was one of only four NBA players (and the only rookie) to average at least 20 points, 7 rebounds and 6 assists per game in 2018-19. All-Stars LeBron James, Russell Westbrook and Nikola Jokić were the others.

Dončić was originally selected by Atlanta with the third overall pick in the 2018 NBA Draft, before having his draft rights traded to Dallas in exchange for the draft rights to the fifth overall pick Trae Young and a protected 2019 first-round pick.