FC Dallas got their first look at goal in the 12th minute as Hernan Grana chipped a ball down the wing for Michael Barrios off a give-and-go. The Colombian winger beat out Jordan Harvey to the ball and found Maxi Urruti in the penalty area, but his shot was blocked i 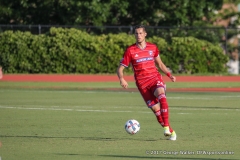 After a back-and-forth first half without quality chances for either side, Roland Lamah nearly opened the scoring in the 43rd minute, rising over Jakob Nerwinski in the box to find the end of a Hernan Grans cross from the right, but his attempt went over the bar.

Maxi Urruti made quick work of the second half with an individual effort to win back a ball and put Dallas up 1-0. Maynor Figueroa launched a ball forward from deep in his own half looking to catch Tesho Akindele on the counter attack. Vancouver’s Andrew Jacobson was able to run down the ball and clear it back up field, where Urruti stripped it from Mathias Laba inside the center circle and then ran past two Whitecaps players on a run to the left side of the box, where he fired a low shot to the far post for his eighth of the season.


The Argentine almost added another just two minutes later with a first-touch volley on the end of a Tesho Akindele cross on the opposite side of the area. The shot, however, went just over the bar.

The Whitecaps pulled level in the 75th minute off a choreographed set piece from Cristian Techera. Michael Barrios was whistled for a foul on the eventual goal scorer 25 yards from goal, and the forward let Fredy Montero run over the free kick before sending a bending ball over the wall and past a diving Jesse Gonzalez inside the right post.

Barrios would try to answer right back for FCD in the 79th minute beginning a rush by cutting off a pass in the midfield. After Barrios lost possession near the end line, Hernan Grana would win it back again with the assistance of Urruti, who found recently-subbed Mauro Diaz at the top of the area. A quick heel pass from the No. 10 would send the ball to Akindele in the are and under pressure, the Canadian International sent it back out wide to Barrios for a chance that was blocked in front by a sliding Jacobson.