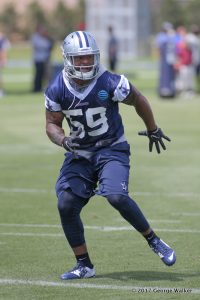 Standout Dallas Cowboys middle linebacker Anthony Hitchens sustained a tibial plateau fracture in his right knee and not a torn ACL as originally featured during Saturday night’s preseason contest against the Oakland Raiders.
The injury, reported by ESPN, is expected to sideline Hitchens for approximately eight weeks.
HItchens’ agent, Jack Bechta, confirmed Sunday on Twitter that the injury was not an ACL tear. The fourth-year pro was hurt in the final minute of the second quarter.
The 25-year-old Hitchens started every game for the Cowboys last season. He finished with 78 tackles last year and has 220 in his first three NFL seasons out of Iowa.
Justin Durant appears to be in line to take over at middle linebacker while Hitchens recovers from the injury. The Cowboys do not plan to rush 2016 second-round draft pick Jaylon Smith in his recovery from a torn ACL in college that sidelined him during his first year in Dallas.
“We’ll stick with our plan with him,” Cowboys executive vice president Stephen Jones said. “You don’t jeopardize a guy’s future over anything like that, but as you know, Jaylon’s coming along. The plan was all along was for him to be ready to play for the Giants (in Week 1).
“Now are we going to throw him in there for 60-something plays? I don’t think so, but a lot of that is just going to depend on what he’s ready for. My guess is probably not.”
Cowboys owner Jerry Jones earlier had expressed concern that Hitchens was seriously injured and would require surgery.
“I don’t want to go there,” Jones told reporters. “All I know, though, is I don’t like the way it sounds.”